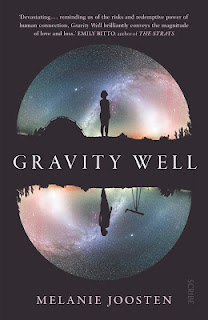 Hey guys, and happy Monday! Today I am thrilled to be sharing with you another book review, this time of a spectacular new novel called Gravity Well, by Melanie Jootsen. I had no idea what to expect going into this, however I must say I found myself hooked on the story and what happened to the characters. I don't think I have ever read a novel that is about space that isn't a sci-fi book, so I was very intrigued to find out what this novel was all about.

Gravity Well follows Lotte and her former best friend, Eve, and how after many years of being estranged, multiple events force their lives to become entwined again. Lotte has just been handed a life-changing diagnosis, and Eve is battling her own demons, trying to figure out what point it was that everything changed. But things have a way of resolving themselves in their own time, and the two women have no choice but to accept the way things have become. Can a friendship be rebuilt after even the most devastating loss?

I was kindly sent Gravity Well by Scribe Books in exchange for an honest review :)

Lotte is an astronomer who spends her nights peering into deep space rather than looking too closely at herself. When she returns to her hometown after years in South America, reeling from a devastating diagnosis, she finds that much has changed. Lotte’s father has remarried, and she feels like an outsider in the house she grew up in. She’s estranged from her former best friend, Eve, who is busy with her own life, and unsure of how to recover the closeness they once shared. Initially, Lotte's return causes disharmony, but then it is the catalyst for a much more devastating event — an event that will change Lotte and Eve's lives forever.

If families are like solar systems — bodies that orbit in time with one another, sometimes close and sometimes far away — what is the force that drives them? And what are the consequences when the weight of one planet tugs others off course?

The long-awaited second novel from the award-winning Melanie Joosten, 'Gravity Well' is a striking and tender tale of friendship and family: both the family we are born to, and the family we choose. Deeply compassionate and profoundly moving, it is a heartrending portrait of how we rebuild when the worst has happened.

I am always one to champion books about female friendship, however this novel explored it at a level of intricacy and complexity that I haven't seen that much in literature. Add in the fact that one of the main characters is an astronomer, and this was probably one of the most unique and interesting novels that I have read all year. Gravity Well is not only gorgeously written, but really gets into the very heart of what being part of a family feels like; the good times, and the catastrophically bad times. Both Lotte and Eve were very interesting and complex characters, and I liked the two narratives in the story, it really made the whole novel more interesting. I think the other relationships in the novel were also facinating to read about their development - especially Lotte's relationship with her mother and father. Altogether, the human relationships in this novel were brilliantly portrayed and explored and this helped to drive the plot forward. 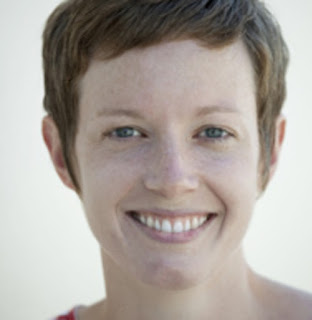 Lotte's career as an astronomer was something I was interested to read about, and I was not disappointed on this front. I think the astronomy in this book had obviously been very well researched and it didn't go completely over my head, which I was grateful for! It was refreshing to read about a strong and independent woman who loved what she did and was career-focused, despite certain people either not understanding that or not being okay with it. The challenges that both women face in this book were portrayed brilliantly and very realistically. The emotion really came through and I cared for them both throughout the whole novel. Gravity Well is itself an astrological definition, but the novel is about people, and their interactions, and how they survive on a planet and its workings that often aren't very kind to them.

Altogether, I loved Gravity Well and it was unlike any book I have read before. If you're looking for a gorgeously written novel about astrology, female friendship and human relationships, then this is definitely the novel for you.

Check out the Q&A I did with Melanie Jootsen as part of the Gravity Well blog tour, here: http://delightfulbookreviews.blogspot.com/2018/05/blog-tour-gravity-well-by-melanie.html