Hey guys, and happy Friday! Today I am super excited to be part of another blog tour, this time celebrating the publication of Gravity Well by Melanie Jootsen. Today I am thrilled to have Melanie on my blog to talk all things family, female friendships, and astrology!

Before that, however, check out the blurb of Gravity Well here...


Lotte, an astronomer who spends her nights peering into deep space rather than looking too closely at herself. Returning to her hometown after years abroad, and reeling from a devastating diagnosis, she finds that much has changed. Lotte’s father has remarried, and she’s estranged from her former best friend, Eve. Initially, Lotte’s return causes disharmony, but then it is the catalyst for a much more devastating event — an event that will change Lotte and Eve’s lives forever.

So without further ado, here is Melanie!

What was the inspiration behind Gravity Well? 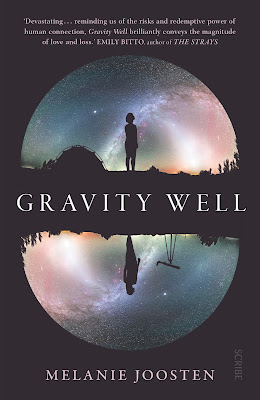 I wanted to write about families and particularly about what happens when the lynchpin of a family dies. I wanted to explore how a father and his adult daughter who have never been close might redefine what a family is in the absence of the wife/mother.

Another inspiration was astronomy. I love the way science writers and astronomers describe the universe in really majestic and compelling language. In trying to make us understand how our tiny self-important planet fits into the scheme of things, they touch on interdependence and how each planetary body is affected by those around it - it seemed to me they are often writing about family.

There were more specific inspirations, but I don't want to give the plot away!

Tell us a bit more about the main character, Lotte. Do you have anything in common with her?

Some people tell me Lotte is not very likeable so I'd like to say I have nothing in common! But there's a lot of me in there. She's fairly direct and focused and she really struggles with the idea of putting her career on hold to have children. She's not selfish but she's aware of what she wants and what she needs to do to get it. She is also really passionate about her interests and expects other people to be as well.

Curiously, there's also a lot of me in the other main character, Eve. She is quiet and somewhat introverted and often tries to please other people. She hates conflict and avoids it at all costs, even if it means further drama down the track.

Do you normally come up with plot or characters first?

A bit of both. This was a tricky book to write - it went through many drafts and I changed the structure a lot. I really wanted to create a sense of tension that pulls the reader in, but also explore the quieter moments in life. I came up with the character of Lotte first but wasn't sure what to do with her. However, I came up with Eve's plot first and had to write a character to explore that situation. 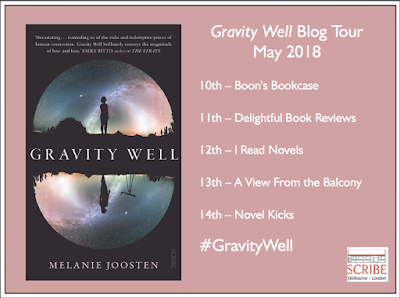 What made you want to write a story that circulates around a complex female friendship?

In early drafts of the novel the two characters Eve and Lotte didn't know one another, let alone form a friendship. I had been focusing on mainly the family relationships between Lotte and her parents but it felt a bit flat on the page. That's when I realised that really I was writing a story about female friendships. I think I resisted it for awhile because I didn't want to write a book that would be described as 'women's fiction'. But really, they're the books I love to read - ones about relationships and friendships and how we are all trying to get by.

Sum up Gravity Well in 3 words!

Thank you so much, Melanie, for appearing on my blog!

Make sure you guys check out the rest of the spots on the blog tour <3 And keep an eye out for a review coming very soon...