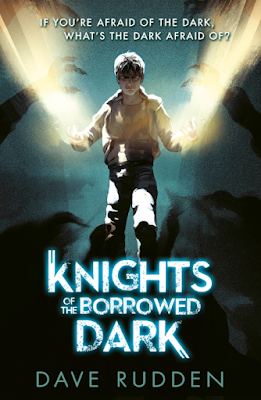 Hello readers, and happy Monday! Today I am very excited to share with you a book review, of the wonderful Knights Of The Borrowed Dark by Dave Rudden. When I got emailed the press release a while ago I read the blurb and knew automatically I wanted to get my hands on it - it sounded so intriguing and mysterious. I am a tad late getting a review up (KOTBD was published on the 7th April - whoops) but I think that this is the perfect book to take on your summer holiday - make sure you pack it in your suitcase!

I was kindly sent Knights Of The Borrowed Dark by FMcM Associates in exchange for an honest review :)

Intrigued to find out more? Check out the blurb here...

Denizen Hardwick is an orphan, and his life is, well, normal. Sure, in storybooks orphans are rescued from drudgery when they discover they are a wizard or a warrior or a prophesied king. But this is real life—orphans are just kids without parents. At least that’s what Denizen thought. . .

On a particularly dark night, the gates of Crosscaper Orphanage open to a car that almost growls with power. The car and the man in it retrieve Denizen with the promise of introducing him to a long-lost aunt. But on the ride into the city, they are attacked. Denizen soon learns that monsters can grow out of the shadows. And there is an ancient order of knights who keep them at bay. Denizen has a unique connection to these knights, but everything they tell him feels like a half-truth. If Denizen joins the order, is he fulfilling his destiny, or turning his back on everything his family did to keep him alive?

The first thing I immediately noticed was that this book seemed to be a tongue-in-cheek spin on the Harry Potter/Percy Jackson type of genre, as you can tell by the blurb. I wasn't really into fantasy books when I was younger, and I'm enjoying discovering fiction of that sort now. Knights Of The Borrowed Dark is a middle-grade fantasy novel following the journey of thirteen-year-old Denizen as he discovers that he belongs to a secret group of knights who battle the most fierce and terrifying of demons. When a mysterious aunt he has never heard of comes to rescue him from the grey and dreary Crosscaper Orphanage, Denizen is faced with the hardest decision he has ever had to make - does he join up the order and fulfil his family destiny, or does he turn his back to avoid imminent danger and death and the hands of the engulfing darkness? 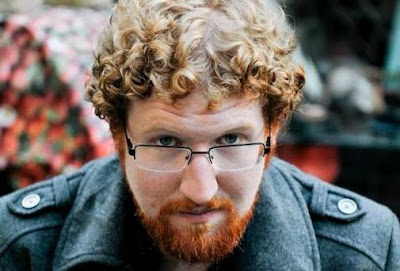 From reading KOTBD, a debut novel, it is evident that Rudden is not only an extremely talented, but incredibly exciting writer. It is definitely one of the best debut novels I have read, and it is going to be a very tough task to have to wait for the next two books in the series. The writing was sharp and engaging, and captured my imagination. My favourite thing about fantasy novels is definitely the world building, and the world that Rudden created was intricately described, well-thought out, and jam-packed with beautifully vivid descriptions.  One of the strongest points of the book was definitely the funny, fresh and fast-paced writing, which effortlessly kept me engaged as a reader and would easily capture the imagination of a ten-year-old.

There was so much action in KOTBD that I struggled to put the book down. I loved the evolution of the story and every twist and turn was so well initiated. There were no plot holes and I was never confused about any details - which can happen quite easily in fantasy novels where the reader is introduced to a brand new world. The plot twist near the end of the book completely took me by surprised and it was so fantastically written. I can't wait for more surprises in book 2!

Another strength of the book was undoubtedly the characters. As I mentioned in a tweet, I thought the female characters in particular stood out. First of all, there's a distinct lack of prominent female characters in fantasy books - I mean of course there's Hermione in Harry Potter - but she's about the only one I can think of. The female characters in KOTBD were intelligent, strong and the very definition of badass. You could tell they were not there as accessories to Denizen and the other main male characters - they were in the story in their own right, and made it a much more diverse read.

Speaking of characters, I thought Denizen was a great hero. He is, of course, the very definition of a reluctant hero, but the way you can see his confidence growing by the end of the book was so heart-warming for me to read about. He was written in a way that was realistic and relatable. The journey that he went on was not only one of high-end adventure, but also one of confidence and self-discovery. Simon was also a great character and I'm so happy that he wasn't left alone at the end of chapter one as I had expected. Simon's journey is continued on throughout the book and I hope to see more of him in book 2 - I can't wait to see the development of his and Denizen's friendship, as friendship in MG and YA books are not given enough importance in many books.

As I mentioned before, the writing was so beautiful, vivid and eloquent, and there were so many quotes I underlined. However, this one on page 267 really stood out for me and I think it sums up the book as a whole -

People hid things. They kept secrets. They changed, or they lied, or they left. They betrayed you, or they let you down. Fire was honest. It just wanted to burn.

So as you can probably tell, I absolutely adored Knights Of The Borrowed Dark and I can't wait to read the next two books in the series.

A couple of months ago I was lucky enough to interview Dave Rudden for my blog, which you can read here: http://delightfulbookreviews.blogspot.co.uk/2016/03/5-minutes-with-knights-of-borrowed-dark.html