I have a very exciting blog post for you today: an interview with awesome teen blogger Georgia Walters, from The Bibliomaniac Book Blog! We met last month at Emily Murdoch's afternoon tea, and since then I have been an avid reader of her amazing blog and an appreciator of her tweets! She stopped by to answer some questions about book blogging, why new technologies are to thank for the explosion of book bloggers and booktubers, and what items she would take with her to a desert island... Oh, and did I mention? She has been blogging since she was eleven. Gob. Smacked.

Hi Georgia! So when did you first start blogging?

Hi Alix!!:D I first started blogging with a few reviews on my dad's blog, which was called Books and Writers. After ages of nagging him to let me blog more, he set up a blog just for me, which we called Books and Writers JNR. Though, since then, my dad moved to a self-titled site and I change my blog name to the bibliomaniac! :)

Do you like writing creatively as well as posting interviews/reviews, and if so, how do you balance writing both?

I used to write so, so much. When I started blogging I stopped writing regularly, though now I've taken to trying to write creatively more again. I always take part in NaNoWriMo, and generally abandon my blog a little in November because of it!

I don't really have much of a balance, though I really should! I write blog posts much more than I write, though what I'm hoping to start doing is schedule my blog posts, so I have more time to write.

Definitely the first Harry Potter, which I read when I was five. Then it was Inkheart by Cornelian Funke, which I must've read at around... Seven? :) It's too hard to choose a current favourite book! I think the best book I've read this year is either Love Letters to the Dead by Ava Dellaira or Laini Taylor's Daughter of Smoke and Bone.

Which items would you take with you to a desert island?

I'm going to technically cheat with this first one :D
1) A bookcase full of books to read
2) A camera, because if the desert island is pretty, I'll want to take pictures!;)

What would you like to do when you are older?

I want to work in any kind of bookish job! I would love to work for a publishing company; either in publicity and marketing, or in designing book covers and illustrating. I'd like to do something artistic; What I'm also interested in is comics, and I'd love to illustrate or write scripts for them. I couldn't pick one job out of all of the above, though! Too hard xD

Do you think, with the development of new technologies, teenagers are reading more or less?

This is a really hard one. I think more, though I could argue and say less, too. If you look at it from one perspective, teenagers are reading a lot less because some are more into video games and social networking. However, I think new technology definitely gets more teenagers to read, as books are more accessible now, with things like Kindle apps that can access books with the click of a button!:)

There has been an explosion of book bloggers and booktubers in recent years. Why do you think this is?

I think this kind of links in to the above question! New technology. I've heard a lot of older teenagers and adults say that blogging wasn't even on their radar at my age. Now, with phones and iPads and laptops, it's so much easier to share opinions on things. 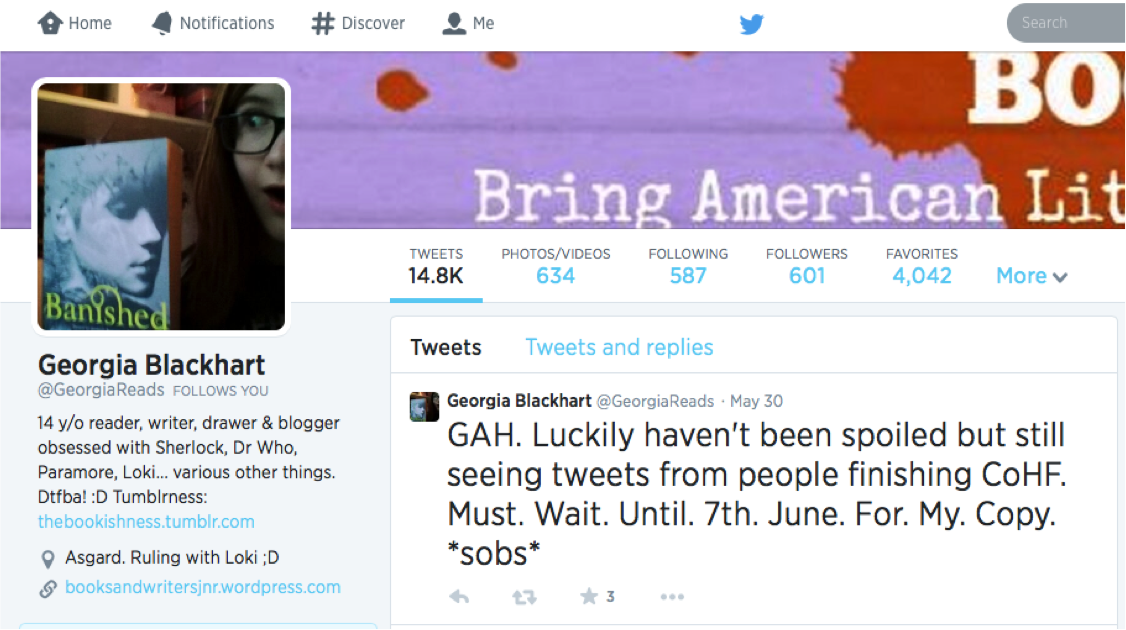 If you could meet any author, which one would it be?

I would love love love to meet John Green! There are so many US authors that I'll probably never get a chance to meet, though.

TEAM PAPERBACK :D Simply because they're the most suitable for school. But of course, hardback books are so pretty...

What advice would you give to bloggers who are just starting out?

Social media is your friend!:D It feels weird to give this advice as I'm definitely not the most successful blogger xD However, I was completely isolated from the blogosphere until the start of 2013. I had no twitter, tumblr, bloglovin', Goodreads, anything. I got a Goodreads account in Jan 2013 and I met a group of bloggers through that. Then I moved into Twitter, and my blog stats started increasing a bit as it was so much easier to meet new people.
Also, tweaking your blog to make it personal and fun really helps. Mine is all amateurish looking, but if you make a blog look eye catching and unique, you will definitely find some readers. :D

Thank you so much, Georgia, for allowing me to interview you! I would seriously suggest everyone reading this to check out Georgia's stuff, she is an amazing blogger and reviewer, not to mention a lovely person!