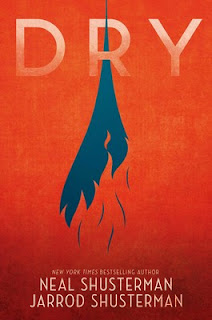 Hey guys, and happy Thursday! Today I am happy to be bringing you another book review, this time Dry by father and son duo Neal and Jarrod Shusterman. I have read the first two books of the Arc of a Scythe trilogy and am eagerly (note: chomping at the bit) awaiting the final book - so I was super excited to hear about this book.

Also - a father and son writing a book together! How cool is that?!

I was kindly sent Dry by Walker Books in exchange for an honest review :)

Dry is a powerful, suspensful, rip-roaring novel that is terrifingly too close to reality. California's water has run out. The 'Tap-out' is here. It started slowly at first - short showers, no sprinklers, no overindulgence. Now indulgence is a thing of the past. The water is gone, and Alyssa finds herself suddenly with the responsibility of her and her brother's lives, when her parents leave in search of water, and don't come back. It is on their journey that Alyssa sees for herself what desperation can do to humanity, and how hard it is to remain humane.

When the California drought escalates to catastrophic proportions, one teen is forced to make life and death decisions for her family in this harrowing story of survival from New York Times bestselling author Neal Shusterman and Jarrod Shusterman.

The drought—or the Tap-Out, as everyone calls it—has been going on for a while now. Everyone’s lives have become an endless list of don’ts: don’t water the lawn, don’t fill up your pool, don’t take long showers.

Until the taps run dry.

Suddenly, Alyssa’s quiet suburban street spirals into a warzone of desperation; neighbors and families turned against each other on the hunt for water. And when her parents don’t return and her life—and the life of her brother—is threatened, Alyssa has to make impossible choices if she’s going to survive.

This story really put things into perspective for me. The idea having something we need so much, yet take so much for granted, suddenly being taken away... it was sometimes too hard to read about. Make sure you read this book with a tall cold glass of water! It is undeniable that Shusterman is a master storyteller, and now it is clear that his son holds the same power! Everything from the plot to the characterisation was perfectly crafted, alongside the undertone that we as the readers should take everything in this book very seriously. We are holding onto our planet by a thread. Everything is dangling on a knife edge. If we don't protect our planet, it will no longer continue to protect us. 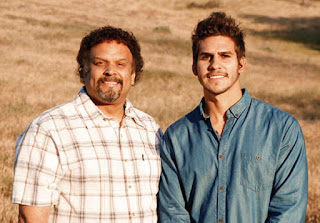 I loved Alyssa, and felt like she was a very realistic depiction of a teenage girl. I have read reviews where readers have criticised her for 'making poor choices' and... what? I would like to see what these people would do if they were in the same position. I, for one, would not have survived as long as Alyssa, Garrett, Kelton and Jacqui. I thought this group had such a great dynamic and all the intricacies in the group were so well described. I think the different narratives definitely added to this - it was really interesting to read about their different reactions to the horror that they were faced with. The authors did a particularly good job (as Shusterman does with Scythe) at showcasing the various moral difficulties to the reader, and revealing the philosophical aspects.

Alyssa and Jacqui were by far my favourite characters, and I found their 'frenemyship' facinating. Shusterman is really good at writing female characters. The dialogue was characteristically Shusterman-sharp, and the plot brilliantly fast-paced. As I could have expected, there was a plot twist near the ending, and everything ended up coming together in a way better than I could have expected.

Once again, Shusterman has proven his mastery in storytelling, and now we know that his son can step up to the plate as well! I'm looking forward to seeing what's next for them...