Hey guys, and happy Monday! Today I am really excited to be sharing with you a guest post by the author of a brand new thriller, Vicious Rumer - Joshua Winning. Vicious Rumer is an exhilarating new thriller following Rumer, an outcast who is under attack from what appears to be every side. Living by the legacy of her notoriously dangerous mother, Rumer soon becomes under threat herself, and figure out the truth behind herself and her own past.

Rumer Cross is cursed. Scraping by working for a dingy London detective agency, she lives in the shadow of her mother, a violent criminal dubbed the ‘Witch Assassin’ whose bloodthirsty rampage terrorised London for over a decade. 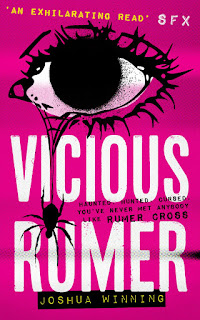 Raised by foster families who never understood her and terrified she could one day turn into her mother, Rumer has become detached and self-reliant. But when she’s targeted by a vicious mobster who believes she’s hiding an occult relic, she’s drawn into the very world she’s been fighting to avoid.

Hunted by assassins and haunted by her mother’s dark legacy, Rumer must also confront a terrible truth: that she’s cursed, because no matter what she does, everybody she’s ever grown close to has died screaming.

Set in an urban sprawl of bullet-riddled buildings, Vicious Rumer is a thriller for fans of Jessica Jones, Lisbeth Salander and films like The Craft.

And without further ado, here is Joshua Winning himself, with a character Q&A!

Tell us a bit about yourself.

Why do you want to know? Who put you up to this? I'm not answering anything until I know this isn't going to come back to bite me in the arse.

You promise this isn't a trick? OK, I'm happiest listening to Stevie Nicks. I swear she's part witch; her music is too spellbinding for her not to be. I also can't get enough of The Dark Crystal. The Skeksis are wicked funny and I want Fizzgig for a pet. Despairing? Basically every second of every day.

Which living person do you most admire?

Anybody who makes it through to the end of the day, every day. The world's a bitch, man. It takes guts to keep going.

What do you consider to be your strongest virtue?

I don't judge anybody, unless they're morons.

What do you most dislike about your appearance?

My hair's a pain in the ass. It's thick as weeds and always gets in my face, no matter what I do. You know a good hairdresser? Or somewhere I can buy a decent pair of scissors? 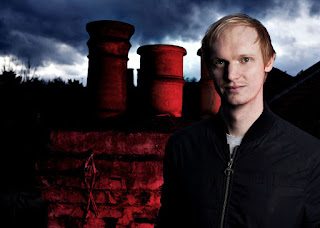 Who or what is the greatest love of your life?

That's sort of personal. I guess my collection of modified Barbies is my great love. I love giving them nose-rings and painting their nails black. They look way prettier that way.

What is your most treasured possession?

The Preacher comic my friend gave me. He's not around anymore and it's all I have to remind me he was ever around. (Thank god he's dead; he'd give me a dead arm if he knew I said that.)

What has been the greatest gift you have ever received?

My ability to be completely invisible at all times. It's hilarious what people get up to when they think they're not being watched.

What do you value about your friends?

My greatest achievement is answering all of your questions even though I'm pretty sure you're going use them against me. Hey, that's my greatest regret, too. Thanks for that.

Thank you so much, Joshua (and Rumer, obviously!) for answering all my questions!