Hey guys, and happy Tuesday! Today I am thrilled to be taking part in a blog tour to celebrate the beautiful new publication from Floris Books, Bear Child. Bear Child is a gorgeously illustrated and beautifully lyrical new picture book for children, and I know that you and your children will love it as much as I do. The story is so beautiful, and is a perfect fairy-tale-like book that is the perfect bedtime story.

'Now that people live in towns and bears live in the woods, have you ever wondered what happened to the bear folk?'

At bedtime Ursula asks Daddy to tell her the tale of the bear folk: special beings who can choose to be either a bear or a person, depending if they want to catch a fish or read a book.

Bear folk live extraordinary lives, he tells her. They are strong and clever, kind and loving, adventurous and creative -- just like her.

Will I ever meet one? Ursula asks. Perhaps she already has...

And without further ado, here is Geoff Mead on the blog to talk all things bears and their prominent (and important) position in books... 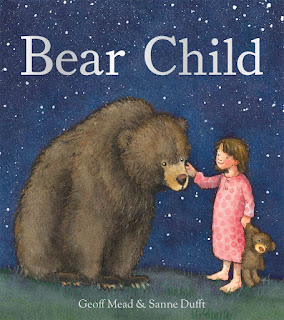 Fictional bears are hugely popular, especially in children’s literature. Like the creators of Paddington, Rupert, Winnie the Pooh, Baloo, and Iorek Byrnison, I drew my inspiration from a profound human connection with bears that seems almost to be part of our DNA.

Our earliest ancestors lived close to nature, competing for habitation and food with their omnivorous ursine neighbours. In 1917 a prehistoric man-made limestone ‘box’ was found deep underground in Switzerland, containing three cave bear skulls carefully stacked and aligned, suggesting some kind of ritual or rite. There are no surviving stories from those times but bears sometimes feature in cave paintings. They have always shared our world and lived in our imaginations.

I originally wrote Bear Child as a gift for my late wife Chris, who had a lifelong fascination with bears. It’s the story of Ursula, a young girl who thinks she might be a descendant of the bear folk: shape-shifters born from the ancient marriage of bears and humans.

Myths and legends about bears abound in every culture that has co-existed with them: from the Inuit in the North to the Ainu in Japan; from West Coast Native Americans to the peoples who once lived in the great pan-European forest. In the animistic world view of hunter-gatherers in which all living things are imbued with spirit, bears are respected as powerful, intelligent, curious creatures with almost human qualities.

Bears retreat to hibernate as winter comes and reappear in the spring and were thus thought by many to control the changing seasons. As omnivores, they showed humans what was good to eat and where to find it, as well as what plants had medicinal qualities. If hunted, their remains were treated reverently. Shamans wore their masks and pelts; claws and teeth were made into sacred amulets; bones were laid out with care and buried with great ceremony. 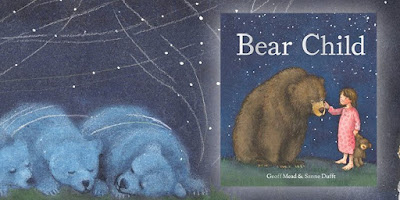 Chris and I once travelled to Minnesota to spend time with wild black bears in the woods, under the expert guidance of Dr Lyn Rogers. We saw for ourselves that these fellow-mammals are nurturing and protective of their young. On all fours, they behave much like enormous dogs but when walking on their hind legs they are surprisingly human-like, so it was easy to understand why they are sometimes called King of the Mountain or Master of the Forest, or – my particular favourite – Old Man in a Fur Coat.

Bear Child draws on a Siberian Ostyak myth about how bears first came to earth, let down on threads made of sunrays and moonbeams by Numitorum, the Great Bear of the northern sky, and on a Native American Haida story about how bears and humans became intermingled.


Our mythic association with bears still shows up in the English language despite the fact that native British bears became extinct 1,000 years ago: we bear heavy burdens, we bear down (and up), we bear in mind, we even bear children! Maybe the story of Bear Child gives a hint to why we’re still so fascinated by our ursine friends.

Thank you so much, Geoff, for appearing on my blog!