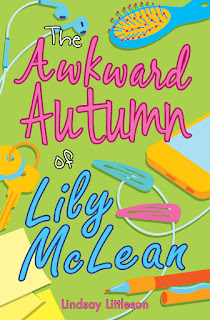 Hey guys, and happy Wednesday! Today I am very excited to be sharing a Q&A with you - with the awesome author of The Awkward Autumn of Lily McLean - Lindsay Littleson!

The Awkward Autumn of Lily McLean follows secret psychic Lily as she starts her time at high school - a time hard enough, without having to keep your psychic abilities under wrap. There's friendship drama, problems at home with her big sister, and someone sinister who won't stop leaving notes in her locker. It's a bit much for one girl to deal with, but Lily is not any normal girl. And the one thing that makes her stand out from the crowd might be the one thing that can save her...

Lily's hoping to put all the madness of the previous summer behind her. Telling people you hear voices doesn't win you many friends. Especially when you're starting high school. Especially when everyone thinks you're just like your troublemaking big sister. At least Lily's best mates Rowan, David and Aisha will stand up for her. But when she finds nasty messages in her locker, Lily knows someone's out to steal her friends and leave her all alone. Lily hopes a fun trip to the Isle of Arran will bring her friends together, but soon those dramas seem like the least of her problems. Back home, her big sister's in big trouble: She might end up in jail -- or worse. The last thing Lily wants is to start up that weird psychic stuff again, but it might be her only hope...

And today I am delighted to be hosting Lindsay Littleson on my blog, where she will be talking all things siblings, the undeniable power of reading, and her advice to budding writers!

Hi Lindsay, and thanks for appearing on Delightful Book Reviews! What inspired you to write The Awkward Autumn of Lily McLean?

My first novel The Mixed Up Summer of Lily McLean won the 2014 Kelpies Prize and when Floris Books said that they’d be interested in a sequel I was thrilled, as I loved Lily and was keen to move her on to the next stage in her life and to give her another chance to use her psychic powers! In The Mixed Up Summer the events take place during Lily’s last week of primary school and in The Awkward Autumn she starts high school and life gets seriously complicated. The theme of transition was important to me, as every year I attend our school’s Primary 7 Leavers’ Dance and it always reminds me of my own final weeks at primary school and all my worries about moving on to high school.

Tell us a bit more about Lily. Do you see aspects of yourself in her character, in any way?

Lily is a reader of books and a writer of lists, so we have that in common. She’s also one of five children and I have four siblings too, although Lily has taken on a lot more responsibility for caring for her siblings than I ever did. It never crossed my mind as a self-absorbed twelve year old to read my younger sisters a story or to help them get dressed in the mornings!

The one aspect where we differ completely is that Lily has psychic powers and I definitely don’t, despite many years of practice. 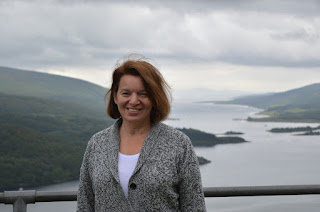 What’s so special about children’s fiction?

It’s hard to beat the magic of reading something fantastical like The Wolves of Willoughby Chase or The Hobbit for the very first time, preferably under the covers by torchlight.
For me, reading fiction as a child gave me enormous benefits. Reading enabled me to escape from the dull routines of school and homework into exciting fantasy worlds. It also enriched my vocabulary, increased empathy and expanded my imagination, all crucial in a future career as a writer!

What were your favourite books when you were a kid?

I read everything that Enid Blyton wrote, apart from the Noddy books, and my favourite was The Secret Island. The idea of living for a whole year on a tiny island without adult supervision seemed very appealing. It’s probably no coincidence that both the Lily novels are set on small islands. I also adored The Family From One End Street by Eve Garnett as I could really relate to bookish Kate Ruggles and her struggle to find peace and quiet from her large family. Another favourite was Anne of Green Gables, which gets a name check in The Mixed Up Summer. Anne is such a relatable character, because the author allows her to make mistakes. Other books I loved were The Silver Sword, Mrs Frisby and the Rats of Nimh, Watership Down and I Am David, all of which I enjoyed reading again to my own children.

What was your writing process like for The Awkward Autumn of Lily McLean?

I work full time as a teacher, so I try and schedule in writing time every evening, though it’s not always possible and I don’t beat myself up when I don’t manage. When I get an idea for a story I usually jot down my initial thoughts in a notebook with little doodles of the characters, but because The Awkward Autumn is a sequel I already knew the main characters and setting really well, and it was lovely to return to them! When plotting The Awkward Autumn, I used post-it notes to plan chapter outlines, figuring out where the red herrings and plot twist reveal should go.

What advice would you give to young, aspiring writers? 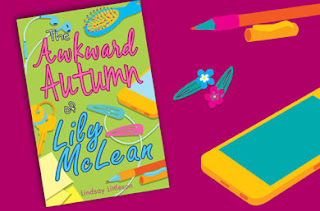 Read lots of books. Get the words in your head so they can come out in your writing. And don’t be one of the many people who’ve said that they’ve always wanted to write a book, but they’ve never got round to it. As Stephen King said, “Amateurs sit and wait for inspiration. The rest of us just get up and go to work.”

If writing is something you really want to do in life, then get started right now, and keep pursuing your dream.

I wish I’d l had more resilience as a young writer. When I failed to get published after a couple of attempts, I gave up, and didn’t start writing again for 30 years...that’s one long sulk!

Life experience has taught me the difference between tragedy and disappointment. If a story is rejected or doesn’t win a competition, I wallow in self-pity for an hour, eat lots of chocolate and then get over myself and move on.

Thanks so much Lindsay for appearing on my blog!