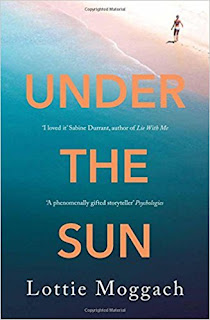 Hi guys, and happy Wednesday! Today I am excited to be sharing another book review that I read while I was on my holiday in Italy about a month ago. As soon as I saw this book on Twitter I knew it was a book I wanted to read this summer!

Under The Sun follows Anna, an expat who moved to Spain to build a new glittering life for herself with her artist boyfriend, Michael. But things soon turn out to not be all that they're cracked up to be. One night Michael packs his bags and leaves, leaving Anna to fend for herself amidst the 2008 financial crisis and the feeling of a bright future slowly slipping away from her. When a businessman approaches Anna one day with an offer to rent Anna and Michael's old home, things appear to have the potential to get better. But when a body washes up one day on the beach, Anna starts to uncover the dark side of this blissful, beautiful backdrop.

Anna’s friends and family think she is living the dream in her beautiful finca under the Spanish sun. But the reality is far from perfect. The handsome, complicated man she was building a life with has left with little more than a note to say goodbye and the future she imagined has crashed around her ears. Anna has secretly embarked on an ill-advised affair and lives above the dingy bar she runs in the sleepy beach town of Marea, surrounded by British expats as homesick and stuck as she is.

When Simon, a local businessman, offers to rent the finca, Anna hopes it will pave the way for her escape. But there is more to him than meets the eye, and when a body washes up on the beach in mysterious circumstances, Anna realizes she may be the only one with the power to unravel the truth. But how can she prove that Simon is connected, and how can she reclaim her house? Anna is prepared to risk everything to get home – even though she’s no longer sure where home really is.

Urgent, gripping and brilliantly observed, Under the Sun is an exhilarating novel about heartbreak, identity, migration and finding a place to call home.

Under The Sun was all that anyone could want from a summer novel - with an exciting and brilliantly described setting, a colourful cast of characters, and a gripping story you can easily lose yourself in. Right from the beginning of the novel I was completely immersed into a world I could visualise easily. I loved the lethargic, balmy feel to the writing, and the edgy dynamic between the characters. 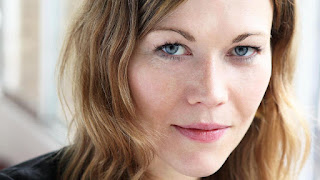 I would have loved more of the novel to be spent exploring Anna and Michael's relationship, and greater detail spent on their dynamic in general. We never actually get to see the side where they are desperately in love with each other - to the extent that Anna moves away from her home in London to be with him in Spain - apart from the few flashbacks throughout the book. I liked how Anna's character was developed in so much detail during the story, but she was obviously really affected by Michael leaving so I just wanted a bit more background on their relationship in general. 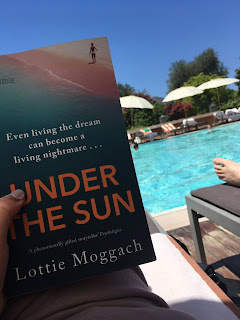 I loved the whole mystery surrounding the men living at the finca, and the body being washed up on the beach. There was just the right amount of secrecy; the reader wasn't left completely on their own to figure it out - I felt as if I was with Anna, uncovering the dark secrets with her. I think the shady element of the story, contrasted with the beautiful setting, was a great part of the novel and I enjoyed this part immensely. I thought that the secret involving Simón was also well explored and I think the ending of the book as a whole was perfect and satisfying.

Overall, I really enjoyed Under The Sun and it's the perfect novel to read by the pool. There were some aspects of the book that I wish were explored in a bit more detail, but overall I enjoyed this book and would recommend that you pick it up for your summer holiday (or just lazing in the park or the garden!)