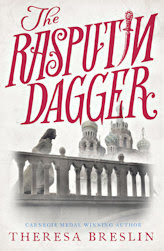 Hello readers, and happy Monday! Today I am delighted to be sharing a review of a wonderful book I read recently - The Rasputin Dagger by Theresa Breslin. The Rasputin Dagger follows Nina Ivanovna, a young woman who after her father's death has to leave her family home and make the journey to St Petersburg, to find a long lost relative who will be able to help her escape an unwanted marriage and a life of misery and restriction. But St Petersburg isn't the city it was before, it is a city of poverty, of political rebellion, and of danger. As Nina gets dragged further into Russia's political situation than she ever imagined, she discovers that there is a fine line between doing what you think is right, and doing what is safe.

On Thursday I was lucky enough to be part of the blog tour to celebrate the publication of this book - check that post out here! 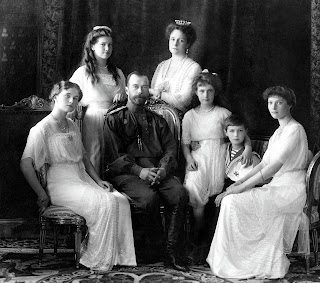 I absolutely loved The Rasputin Dagger. I didn't really know what to expect going into it, but pretty much after the first chapter, I was hooked. Right from the very first page I was sucked in to this world, which was superbly and intricately described. Right from meeting Stefan, I knew that he would become one of my favourite characters, who I would be rooting for the whole way throughout. All of the characters were so well described and it was very interesting to read how they all interacted with each other - I especially enjoyed the scenes with Nina and the Romanov family.

The Rasputin Dagger is undeniably a book with a fantastic story at its heart; each twist and turn was perfectly crafted to have the biggest impact! The plot was so well thought out and kept me thoroughly engaged in the story until the very end. Nina was the perfect protagonist to carry this story - she is daring, adventurous, and determined - everything I love about a female protagonist. 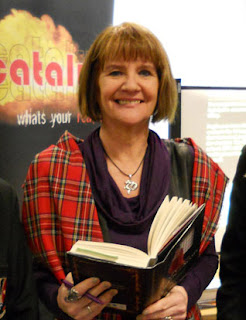 I have never read any books by Theresa Breslin before - but I completely fell in love with the writing in The Rasputin Dagger, and I will definitely be diving into more stories by her. Breslin really is an expert storyteller; she reeled me into her world of revolutionary Russia, and I was very sad to leave it at the end of the book.

Just like any great book, the ending of The Rasputin Dagger brought the whole story together, yet left me wanting more. The tension was so palatable and so real to me that I almost couldn't stand the tension of the last few chapters!

Overall, I loved The Rasputin Dagger - it is definitely one of the best historical novels I have ever read, and I will definitely be checking out more of Theresa's books!