BLOG TOUR | The Summer That Melted Everything | 5* BOOK REVIEW

Hello readers, and happy Saturday! Today I am very excited to be on blog tour again, to spotlight a FANTASTIC new novel that is set to be on my list for my favourite books of 2016. The Summer That Melted Everything a contemporary magical realism novel set in the darkest depths of Ohio, following the events in Breathed, a small town slumped under a suffocating heatwave and the appearance of a small, scruffy, thirteen-year-old boy who claims he is the devil. The events that follow take several dark turns and the question of how to differentiate between good and evil take centre stage, as humankind is presented at its most malevolent.

I was kindly sent The Summer That Melted Everything by the wonderful Sophie at Scribe Publishing in exchange for an honest review :) Scribe always send me such special books, and I knew going into this one as much as I have adored the other novels Scribe have sent me! 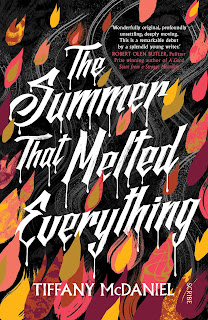 Fielding Bliss has never forgotten the summer of 1984: the year a heat wave scorched Breathed, Ohio. The year he became friends with the devil.

Sal seems to appear out of nowhere - a bruised and tattered thirteen-year-old boy claiming to be the devil himself answering an invitation. Fielding Bliss, the son of a local prosecutor, brings him home where he's welcomed into the Bliss family, assuming he's a runaway from a nearby farm town.

When word spreads that the devil has come to Breathed, not everyone is happy to welcome this self-proclaimed fallen angel. Murmurs follow him and tensions rise, along with the temperatures as an unbearable heat wave rolls into town right along with him. As strange accidents start to occur, riled by the feverish heat, some in the town start to believe that Sal is exactly who he claims to be. While the Bliss family wrestles with their own personal demons, a fanatic drives the town to the brink of a catastrophe that will change this sleepy Ohio backwater forever.

I adored this book. It is everything and more I could have wished for from a summer novel. I lost myself in the characters and the story and I spent the majority of my time reading it with baited breath. This was not only due to the achingly beautiful language, but also because of the perfectly developed plot and the characters that stayed with me long after finishing the very last page. 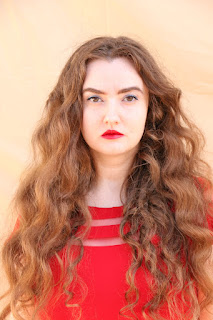 McDaniel evidently has what it takes to be a prizewinning author, and The Summer That Melted Everything is without doubt the standard of a prizewinning book. I don't think I've read a book by a young author before that is so refined, haunting and eloquent in its description of a town hurtling uncontrollably into madness. The descriptions of the town itself, along with its inhabitants, were so in-depth and detailed that I felt I was there, looking in on the action. The writing was equistite, and just made the book as a whole that much more enjoyable, and a story one could lose oneself in.

The characters were complex, vivid, and most importantly: realistic. McDaniel captured the very essence of small-town life so perfectly and the characters were all so well thought-out and they all played their part in putting forth the tragedy that ignorance and prejudice can have on a community. I thought it was so clever how McDaniel worked the moral messages found in classics such as To Kill A Mockingbird into fresh characters and new scenarios, with the addition of religious and cult aspects that made the story that much darker.

I loved the narration of Fielding in his childhood and in the present moment of his old age. When I read the chapters of an older, demoralised and mentally unstable Fielding, I couldn't wait to find out what happened to make him so broken. These parts of the novel left me waiting for the catastrophe, for the trigger to be pulled. McDaniel's writing maintains the inevitable to still be considered a tragedy. These chapters drove the story forward and it meant the novel had that edge of mystery that is so important for a great book. 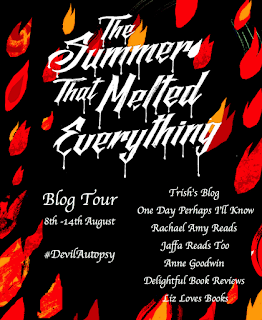 I also loved the character of Sal and adored his friendship with Fielding. The ending of the story quite literally broke me and, although I could see it coming, it still shocked me just the same. I knew the story would end in the ultimate sacrifice, and McDaniel handled the inevitable in a way that was heartbreaking, yet believable in the way events panned out. Autopsy was very much like Atticus Finch in To Kill A Mockingbird but I thought his character was a lot more complex and I enjoyed finding out more about his character as the story went on.

The Summer That Melted Everything is a novel that shows that there are devils at every corner, and those that don't at first appear to be devilish can turn out to be the most evil of them all. McDaniel begs the question through her writing how far we can be pushed as humans, even to do the most terrible and unthinkable of things. It is a story that shows how dangerous and deadly ignorance can be, and how far our brains can be moulded to fit the feelings of fear and hate. For me, the most powerful line of the book was undoubtedly -

The devil - well, he turned out to be the only Angel between us.

Overall, I think it is pretty evident that I adored The Summer That Melted Everything - and I can't wait to see what McDaniels produces next. It is evident that she is a literary heavyweight and I am sure that she will be a huge name in years to come.

Make sure you guys check out the rest of the posts on the blog tour!

Buy The Summer That Melted Everything here: https://www.amazon.co.uk/Summer-That-Melted-Everything/dp/1504725425