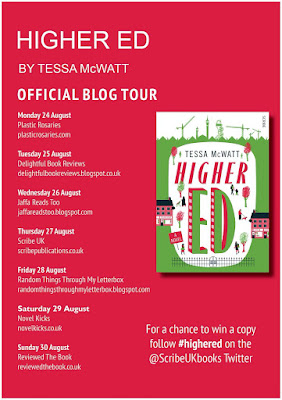 Hello, readers! This summer, I have been completely inundated with requests to participate in blog tours- and I love it! Blog tours are not only great opportunities for authors and their publicists to promote their work, but also for people to discover new bloggers and spread the word about wonderful books.

This is especially the case for a newly released, or not well-known book.

Therefore, when I was approached by Scribe UK publishers if I wanted to review Tessa McWatt's new novel Higher Ed and participate on the blog tour later in August, I simply couldn't resists.

Higher Ed is a novel that chronicles the lives of five radically different, similarly passionate Londoners who are trying to get to grips with the city that they reside in and the people that live in it. It is a novel full of curiosity, of questions and of the one undying question that each person is forced to confront at some point in their lives. Who will bury us? It is a novel that is as philosophical as it is anthropomorphic. It didn't try too hard to be something it wasn't. It was beautiful in its simplicity of exploring the complexity of human existence, and for this reason, I loved it. 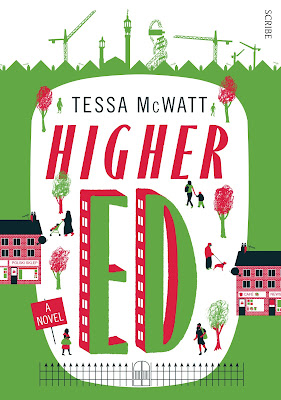 Francine would prefer to be thinner, but is happy enough to suffer her boss' manhandling of her ample hips if it helps her survive the next cull in Quality Assurance. She just wishes she could get the dead biker's crushed face out of her mind's eye.

Robin is having a baby with the wrong woman, wishes he were with the perfect Polish waitress instead, leans hard on Deleuze for understanding, and wonders if his work in film will continue to be valued by the university management.

Olivia is angry — angry with her layabout mother, with her too-casual BFF, and with her own timidity and anxiety. Perhaps the wisest of her lecturers will help? Knowledge is power, right? And she's beautiful when she's angry.

Ed wishes he’d never gone back to Guyana to help his rass brother as it lost him his mini-Marilyn wife and the possibility of watching his only child grow up — until someone surprising crops up at the crematorium.

Katrin is starting not to miss Gdansk or Mamunia so much, and starting to understand London living. But if she works and hopes harder, maybe she’ll secure a full British future for herself and her mother with the Good Englishman.

The five of them cross paths and cross swords to bring London living unforgettably to life. Real London lives. 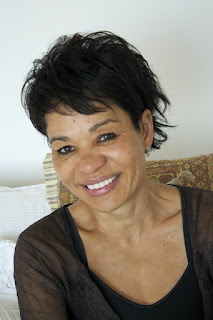 This book truly is fabulous, and I was hooked from the very first page until the very last. If you're intrigued to find out more, I have an exclusive guest post for you from a chapter with the narrative Katrin, a Polish waitress who wants nothing more than to get to grips with the complexities and heartache that comes with the day-to-day of London life.

This morning she has no paper for the toilet. Forgotten yesterday, no time, too tired, passed the shop, to bed. To sleep. She washes herself in the basin, on tiptoes, thigh on the sink, water splashing on the floor. Washes her hands a second, third time. Glances out of the window at the flower box, the frost that didn’t come, and feels again the waiting inside. The tick-tocking of morning, watching. But she must go to work. Work takes her away from the window boxes, the waiting on the shoots in the soil, but in the café there is the man who comes every day now, to smile at her. He will never love her if she cannot even have paper for the toilet.

Outside: the crocuses, purple, white, maybe, the ones she saw last year and named Beata one, two and three, for her mamunia, but cannot remember which is which, along with the toilet paper. The tips, there, just beneath the dirt around the tree. This makes the hair on her arm stand up. This England sight, this not-Poland sight, this evidence that she is making her life on her own and for her matka when she will come in May. February in Gdansk is snow. February in London is the poking heads of purple and white.

Katrin swallows. The taste of marmalade. In the coffee shop there is angry Claire from Tottenham and Alejandro from Madrid and she is Katrin not from anywhere now, not from Gdansk, not from her father who left, not even from her mother who sleeps at the edge of the big bed where the pillow beside her is still dirty with her husband’s hair oil.

“You take your time,” Alejandro says, as she walks in, and she looks up at the clock to see that she is not yet late.

“You take the piss,” she says, and they smile, because this is a sentence he himself has taught her. “Second person singular, showing improvement,” he says, and her day will go well, now, here on Upper Street where the man might come back and Alejandro will make her laugh.

But Alejandro is not fun today, having a fight with his girlfriend by text, and there is a sourness from Claire: “This country is fucked. They are ripping us off.” And when police sirens sound in the street: “It’s all kicking off.” These words make Katrin go curly inside. Claire throws slitted eyes at her and complains that Katrin is not doing enough refilling of the coffee machine. And when the man comes to the Epicure Café at the end of her shift she tries not to look unhappy.

“You need a pastry, too, sir,” she tells him, holding the smile in her mouth and his coffee in her hand.

“You must call me Robin,” he says, and she looks away, not because she is shy but because she loves this name. This man is one of the birds, the early morning bird, she has learned in English.

“Robin,” she says and waits to see if he will take up her suggestion, but she thinks he is not really a pastry man. He has long eyelashes under his glasses. He is a man who lives through his eyes not his mouth.

“Nothing else, thanks. This is fine,” he says and his long fingers, the fingers of someone who plays the piano, take hold of his coffee cup. “Did you see that film?” She does not remember the name of the German-Turkish director of this film, but its title in English, Head-on, is a way of speaking in this language that she must practise.

“Not yet, I will, I will,” she tells him, and wishes she was not so tired at night. And there is Claire with a look like there is a snake in her throat, watching her, so Katrin moves to clean the table beside him, even though there is not dirt there, but there is the ribbon of the sun. When London first loved her it was always night time, Soho, films to help her English, and quiet bars on nights off from the loud one where she worked with Ania who went back to Poland, Ania who could not love these English men. Ania said, you are educated, they think you are cheap because you work in this bar, and they will never treat you as you deserve. Katrin would loosen the pony tail of her straight blonde hair, letting it fall towards her face to make it look less angular, more oval and English, but Ania said she would never fit in. Ania went back to Gdansk, where she is working in an office for less than one quarter of what Katrin makes in the café. Okay, so it is not anymore a bar; things are better: she works in the day.

A tall woman with a pink scarf wrapped high around her neck, covering her chin, enters Epicure. She walks like a soldier towards another woman at the back table, who stands in time for the pink woman to fall towards her and into her arms crying, like she is remembering what children do. The friend holds her tight, while the pink-scarfed woman cries and says not a word. They stand like that for a long time. Katrin watches until both of them sit down. When she looks back over at Robin he is staring at the women, before he looks at her. He nods at Katrin with a face that says, yes, sometimes things are exactly so.

Ania told Katrin’s mother a lie. A lie that Ania knew was the only thing to say to her best friend’s mother, because mothers are all the same. She told Beata that by the time May came and she was ready to move to her daughter in Islington, England, that the twenty-six-year-old Katrin would be married to an Englishman who would help her to find a job suited to the economics degree her daughter achieved at the University of Gdansk.

No matter. This is Robin, who teaches at a university and said her English is perfect, and this is a job in the day, and the crocuses are coming up.

I hope you loved that extract and have enjoyed this spot on the Higher Ed Blog Tour. Make sure you check out all the other spots as the tour goes on!