Happy Easter, blog readers! I am sorry that I haven't been very active recently but there are lots of exciting titles coming out soon, as well as more author interviews and posts that I can't wait to share with you. There are also a few book events which I am attending in the next few months so I will be sure to write up posts on those for you. 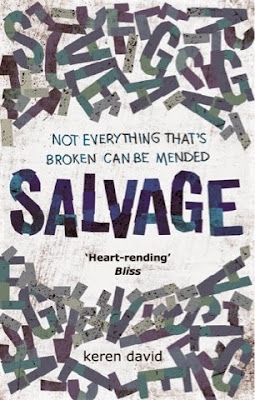 Yesterday I finished reading the last book in the YA Book Prize shortlist, and I spent some time reflecting on how awesome and diverse the shortlist is! Although all the books come under the huge umbrella of 'YA' literature, the genres and styles of writing are so different yet they all fit together so beautifully. As well as your standard romances and dystopian (which is growing increasingly popular in YA literature as the years go on) I found myself enjoying new styles of books that I hadn't ever picked up before, for example horror and comedy.

One of my favourite books in the YA Book Prize shortlist is a realist coming-of-age novel written by Keren David, called Salvage, about two estranged siblings Cass and Aidan, whose worlds collide when they are finally reunited after many years. This book was touching and tender and I found myself drawn to the two narrators Cass and Aidan, and relating to them at every moment. I was very grateful to get the opportunity to interview Keren for this blog and Huffington Post, all about writing, broken family relationships, and if she thinks that everything (as according to her title) can eventually be salvaged...

How/why were you inspired to write Salvage?

As someone who spent a long career working as a news journalist, I often get my ideas from news stories, and this was a report about birth families contacting adopted children through social media. I thought it was interesting, and would make a good starting point for a book, but did nothing about it because I had another book to write. Then, a year later I was watching my son play football and one of the other mums said, 'I know what you should write about,' and it was the same thing. It turned out that she was a social worker in the adoption field, so was able to brief me on the background.
I loved the idea because it had so many different aspects and viewpoints -  a real minefield of emotions and ethics.

What interests you about family relationships, especially 'broken' families who are reunited?
One theme of my books seems to be family secrets -  the way that things we don't remember and aren't told can affect us enormously.  In Salvage  I wanted to examine what we mean by family, how we create families and what remains when families fall apart.  I'm just fascinated by people, and families are so important in forming who we are.

Where did the inspiration for Cass and Aidan come from, and what was it like writing from two different perspectives? 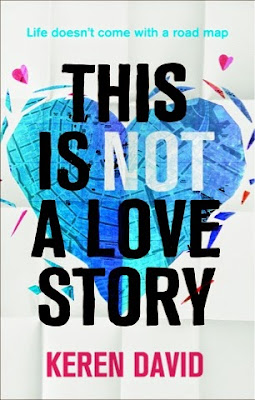 I wanted to contrast the lives of two siblings, one who was adopted and one who grew up in care. I knew that older boys often end up without an adoptive home, so that's why Aidan is the older one.  I saw them both as survivors who shared a chaotic early childhood, of neglect and abuse. Cass was adopted and her life changed completely to one of love and privilege, so I imagined her as a small girl, desperate to hang on to this new home, and suppressing feelings and questions to do so. Aidan was inspired by reading about children who have grown up in care and been badly treated, but also by the good that excellent foster parents can do.  He was very easy to write, Cass was far more difficult, I think because she was a mystery to herself!

What message were you aiming to put across through Salvage?
I don't think in terms of messages, but I hope that Salvage will make people think about families, about adoption and, above all, about how we should nurture, protect and care for children in care and care leavers. I think it's disgusting that so many of our social problems -  crime, homelessness, drug and alcohol abuse -  involve people who have been let down by our care system.

Who did you relate to more, Cass or Aidan?
Funnily enough, Aidan. Although Cass is much more like me as a teenager. I think it's because I find boys easier to write.

What opinion do you have on the current state of Social Services? Do you think the system treats young people like Aidan well?
There are many wonderful people working with cared-for children, including social workers and foster carers, and I think we should be proud of them. But there are far too many children still being let down by the system, as recent court cases have shown.  Although rules have changed about children leaving care at 16, so that they can stay with foster carers, there is still the scandal of kids leaving care to live in hostels, flats and bedsits and fend for themselves. The current minister for children and families Edward Timpson comes from a family of foster carers, and I think he's done a good job, which I hope will be continued by the next government. Children in care should be a priority for politicians, not an afterthought.

Do you think 'broken' relationships like Cass and Aidan's can always be 'salvaged'?
No, some people are so damaged by neglect and abuse that it may be easier to look forward rather than revisit the past. I tend to think that reunions between birth families and adopted children should be done with professional support, for both sides.  However, for many people, I imagine the chance to be reunited with a long-lost sibling is wonderfully healing and helpful.

What did it mean to you for Salvage to be shortlisted for the YA Book Prize?
I was so happy and grateful. For several years I've been one of a few authors working hard to promote British YA books as a brand -  UKYA - to raise our profile alongside the American big sellers. I saw the establishment of the YA Prize (which is for British and Irish YA writers) as a huge step along that path.  Yp be shortlisted as well -  that was just brilliant.

What other projects are you working on at the moment (that you can tell us about!)
I'm just finishing a historical  YA novel which I've been working on for a few years now. It's set in Canada in 1904 and 1994, and it hasn't got a publisher yet, so I'm hoping someone will like it. I've also just started writing my next contemporary YA book for my publishers, Atom. It's called Cuckoo and it's about a former child star who loses his way in life and finds an unexpected ally.  I'm also working on the script for the musical version of my book Lia's Guide to Winning the Lottery which I'm writing with composer Paul Herbert and lyricist Andy Kaby. And in May my next YA  book comes out, This is Not a Love Story, which is about falling in and out of love and is set in Amsterdam. 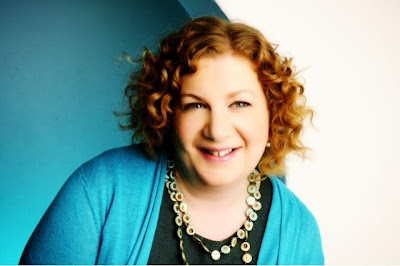 Any tips for aspiring young writers?
Try and write a target amount of words every day, to let your story grow. Don't be too harsh on yourself, only the final draft has to be perfect. And switch off the internet!

Thank you, Keren, for being interviewed!