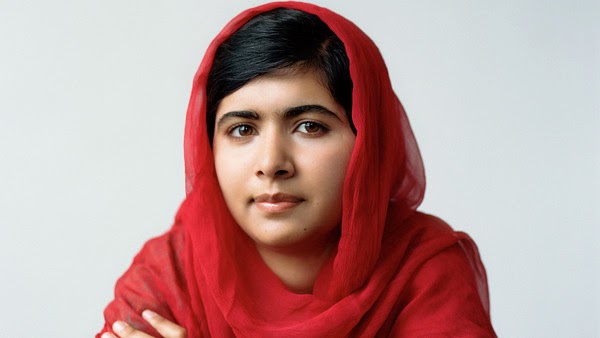 About a week ago, I was sent teenage blogger, campaigner and fighter for girl's education Malala Yousafzai's new book to review. It was probably my most highly anticipated book of 2014 so far, as not only have I been following Malala's story on the news since she was shot by the Taliban in early October in 2012, but ever since she rose in prominence and notoriety from the work she has done for women's education, I have been fascinated to find out what exactly goes through the head of this seventeen-year-old, only three days older than myself, and how she became to be the inspiration that she is today. 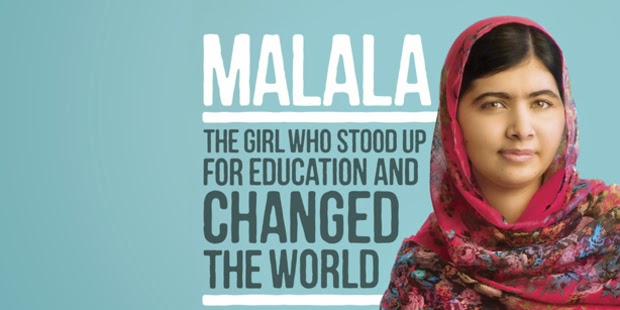 As I anticipated, Malala's book did not disappoint one ounce. The voice coming out from the pages were distinctly that of a young teenager, burning with ambition and an unprecedented curiosity of the world; not to mention the fervent desire to learn. I had always known that I was lucky to have the education that I have, however Malala's book really hit this home. I was struck by the sheer courage of Malala and her classmates, her teachers and her parents to continue the education of girls in their school, in one small village in Pakistan, despite the looming threat of the Taliban that was forever hanging over them. The bravery it must have taken for them to continue their learning, when the Taliban had announced on national radio that it was a sin for girls to go to school, and men were patrolling the street with guns, ready to kill anyone who would contradict this rule. When I was thirteen, I would moan at having to get up early, get on the tube and go to school on a Monday morning. On the other side of the world, there was a girl the exact same age as me, covering her face and hiding her books under her clothes as she took a back road to the school that was right next to her house. It's unbelievable the amount of differences between us: even though we are two girls, the same age, both obsessed with the Twilight films and reading... What separates us is where we live, and the fate that one of us easily has what the other longs for. The right to be educated, and enjoy learning in a safe environment where we have the right to choose what we want for our future.

At first glance, it may seem difficult to imagine how myself and Malala can ever be alike. The similarities between us, however, and millions of girls all around the world, is that in some way or another, we are all belittled or underestimated by our gender. Just as Malala describes in her book, although Muslim women are often denigrated and controlled by the men in the Taliban, women in the western world are also objectified by the media and how society defines them. In drawing out these similarities between us and our two very different worlds, Malala is pointing out that it is the power of education, and the knowledge of our own self-worth, that can set us free.

However, it isn't only the correlative subject of education that made me recognise the similarities between Malala and the average teenager. In later chapters of the book, when Malala describes her new life in Birmingham, I realised not only the shock and unfamiliarity she must have felt to be introduced to an entire new lifestyle, but the fact that the she feels defined by the person she was in Pakistan, and an ardent sense of duty and responsibility to continue the work that she started. When describing her friends at her new school, she points out that although there is a distinct difference between them and herself, they both have experienced things that neither one will understand, and perhaps are more similar than either party anticipated. The freedom that western girls experience by dressing the way they want to and not being limited to an tight supply of certain music, films and books is also their imprisonment, Malala points out. We are all objectified and diminished, as women, no matter where we live.

Throughout the course of the book, Malala's world changes drastically, however her spirit and determination does not falter. She never forgets her roots, where she comes from, and where she's going. Just because she lives in Birmingham, England, a place where girls are free to have an education and choose their own future, Malala does not forget the thousands of girls and women back in Pakistan who do not have the choice, or the freedom to shape their own future. Malala continues to speak out, and spread her gospel of education through her work for the Malala Fund. As she advocates, she will not stop fighting until every girl in the world has a safe place to be educated, to learn, and to be free.

From Barack Obama, Beyoncé and Angelina Jolie to me, a seventeen-year-old girl from London, millions around the world have been touched and inspired by Malala Yousafzai, and millions more will continue to be impelled to action by the release of her new book. I hope, along with this gospel for equal rights to education for all, and Malala's persistent campaigning, we can actually change something and ensure all girls are given the choice to shape their own future.

Malala Yousafzai is not only 'The Girl who was Shot by the Taliban'. She is the girl we teenagers should aspire to be like. She is the girl who will shape our generation, and remind future ones that with the power of education, one can achieve anything and everything.