She Is Not Invisible by Marcus Sedgwick (*****) 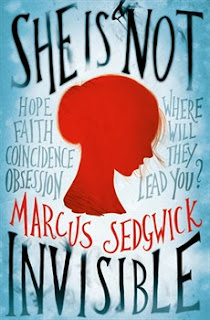 This was a complete and utter gem of a book, and I loved it so much that I even re-purchased it for my friend (I pray that she isn't reading this now!) as a birthday present. Right from the first page I was enchanted by the characters and the storyline, aside from the fact that I knew I was meeting the author in a week's time for an interview, so I knew that I could ask any questions that I felt needed answering, as I often wish after I have read a book. However when I finished reading it I felt no discontentment, no confusion, no feelings at all other than sadness that the book was over. As far as the interview goes, I had to record it on my IPad so it is taking quite a while for me to type up, however when I do eventually finish it, it will be up on this blog!

Firstly, I thought that the way Sedgwick started the book was perfect. I immediately felt the strong, very adolescent voice of the protagonist, Laureth, instantly come through, and that's what I appreciate the most about books. If I can't relate, or at least feel for the main character, I find it incredibly difficult to get through the book. In the first chapter, Laureth and her strange yet instantly loveable younger brother Benjamin are at the airport planning to run away to New York to find their father, and there is a section where Benjamin is worried that his toy Raven called Stan won't be able to get on the plane as he doesn't have a passport. A short tennis-match disagreement follows, and this immediately reminded me of the many arguments I have had with my younger sister- a reminder to many of us I am sure that, like Laureth, maybe we need to be a bit more patient with our younger siblings! Overall, I think that the thing that possibly made the book was the unbreakable bond between Laureth and Benjamin, and it gave me a lot to think about, mainly that family is the most important and vital thing in your life, whether you are visually impaired or not.

The one thing I found most interesting about this book was the way that the minor characters appeared more intriguing than in any other book, as Laureth couldn't describe what they looked like, we are free to imagine that for ourselves. The major shock at myself was when I imagined Michael as white- as he said Laureth did- and this shows what our society is like, and still like, even though we are in the age now when we think we are perfect. Sedgwick's method of description was a much better way of going about it... Describing the air around the character rather than their visible appearance.

Like any brilliant book, 'She Is Not Invisible' included many merits: it made me laugh, it made me cry, but most of all, it made me think. Throughout the book, there were many points at which I completely forgot that Laureth was blind- and that, I think, was what Sedgwick was trying to get at. Any good book challenges prejudices- and that's what this book did, for me. The fact that at no point Laureth moaned about her inability to see the world around her surprised me too, as did the fact that she never blamed anyone else about having preconceived opinions about her. The book was, as a whole, brutally yet heart-warmingly honest, and that's what I think the best thing about this book was. Once I had finished the book, I found the note which Sedgwick had written saying that the first word of every single chapter spelt out the overall message of the book:

'One thing: when you learn what she deals with you might love the blind girl who knows that it's never been her sight that she needs, that it's trust, love and faith also.'