Hey guys, and happy Thursday! Today I am very excited to be on blog tour to celebrate the brand new book from Carnegie medal winner Theresa Breslin, the wonderful historical novel The Rasputin Dagger.

The Rasputin Dagger follows Nina Ivanovna, a young woman who after her father's death has to leave her family home and make the journey to St Petersburg, to find a long lost relative who will be able to help her escape an unwanted marriage and a life of misery and restriction. But St Petersburg isn't the city it was before, it is a city of poverty, of political rebellion, and of danger. As Nina gets dragged further into Russia's political situation than she ever imagined, she discovers that there is a fine line between doing what you think is right, and doing what is safe.

And today I am delighted to welcome Theresa Breslin to Delightful Book Reviews, where she will be talking about the extensive research she undertook to write The Rasputin Dagger... including Fabergé eggs!

Fabergé is the name of a family of Russian jewellers who became known for the skilfully crafted and expensive eggs they supplied to the Russian royal family.

The first ‘Imperial Egg’ was made in 1885 for Tsar Alexander III who wanted to give his wife, the Empress Maria, a special gift for their Easter festivities. This one was called the ‘Hen Egg’ because, inside the white enamel shell was a yolk of gold which opened to reveal a golden hen with ruby eyes, which itself contained a miniature gold and diamond crown and a ruby-stone pendant. Not surprisingly, the Empress adored her present. And so, the Tsar began a royal tradition of gifting unique, lavishly decorated and incredibly costly Fabergé eggs for special occasions.

The shape of an egg as a symbol is interpreted in many ways by many different cultures – including a representation of the arrival of Spring, new life and Hope. Decorating hen’s eggs - ordinary hen’s eggs, that is, NOT golden ones! – was, and still is, a widespread activity done every year at Easter. It was my grandfather who showed me how to pierce the egg carefully at each end and blow gently through one hole to push the contents out the other side. Then there was the fun part of painting the surface with a face or pattern or any abstract splurges of colour. Such happy memories!

The eggs of the Romanovs, the Imperial Family who once ruled Russia, cost much more than any egg I made or have since owned. Over the years, until the abdication of Tsar Nicholas II in 1917, approximately fifty were commissioned by Russian royalty. Made from precious metals and studded with jewels: sapphires, emeralds, and diamonds, they were miniature masterpieces. A few of these have still to be traced, but one egg, accidently discovered recently by a scrap metal dealer, was valued more than 20 million pounds!


I move about a lot, researching and speaking about my books. On my travels, including those I made for The Rasputin Dagger, I buy local books and examples of traditional craft work from the countries I visit. The eggs I own are of little monetary value but I treasure them. Wooden and alabaster, delicate Oriental with fine brush work, best china and pottery and, of course, hen’s eggs hand-painted in traditional Eastern European style. 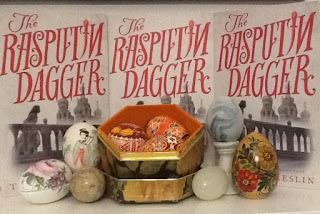 To this day Fabergé still make beautifully designed eggs. Much as I would like to, sadly, I do not yet have one of these.

However, to my delight, when wandering along a quiet London Street In Mayfair one day I came across a Very Significant Shop! Tucked away from the bustle of nearby Piccadilly is the deceptively small frontage of an outlet bearing a brand name of international repute.

In case I ever needed to find it again I took a photograph. 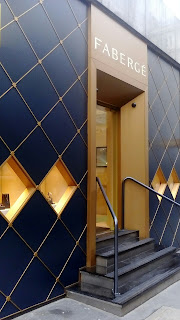 So, I can still hope…

Thank you so much, Theresa, for appearing on my blog!

Make sure you guys check out the rest of the stops on the blog tour! Stay tuned for my review of The Rasputin Dagger coming soon...