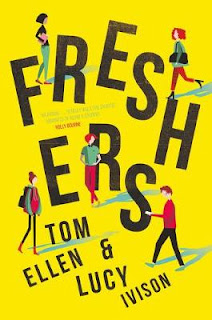 Hey guys, and happy Monday! Today I am SO EXCITED to be sharing this post on my spot on the Freshers blog tour, to celebrate the publication of the wonderful Freshers by Tom Ellen and Lucy Ivison! Freshers follows first years Phoebe and Luke, as they start their first term at York Met. Coming from the same school, Phoebe has fancied Luke since forever, so she's hoping that uni will give her a chance to finally come out of her shell and become the girl that could potentially go out with Luke Taylor.

While Phoebe appears to be making the most of her new life and surroundings, for Luke things are a little more difficult. Freshers isn't what he expected it to be, and everyone else seems to be having a much better time than he is. When the two come together, the result is a mix of occurrences that are hilarious and surprising, accurately representing the wonderful (yet slightly terrifying) randomness that is The Freshers Experience.

Phoebe has been waiting all summer for uni to start and her life to finally begin. And knowing Luke Taylor is going to be there too makes the whole thing even more exciting...

But Luke's relationship is secretly falling apart and campus life isn't proving to be the escape he thought it would be.

When the two collide in the madness of Freshers' Week, everything changes - and they both get sucked into each other's worlds in the most messy, intense and hilarious ways imaginable...

For my spot on the blog tour today, myself and Tom Ellen will be sharing a Freshers' memory... consider yourselves spoiled!

This is an (only mildly embarrassing) photo of me in about 2005, from the York University production of 'The Seagull' by Anton Chekov. I'm in the back row, to the immediate left of the guy in the hat. Being in the Drama Soc was quite a big - and generally hilarious - part of my university experience, and I always wanted to get it into FRESHERS somehow, but in the end we just couldn't find space for it. But there were definitely enough ridiculous events to merit its inclusion. 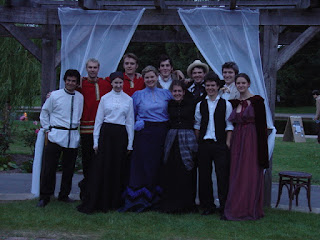 At one point during our performance of 'The Seagull', for instance (which was being held outdoors, in a local park) an extremely drunk bloke wandered right up to the side of the stage and started shouting at both the actors and some swans that were also stood nearby. He then started trying to dislodge a litter bin by kicking it really hard.

Unfortunately, this all happened during one of my bits of dialogue, and I remember looking out into the audience and seeing that, literally, not a single person was looking at us lot on stage; they were all focused on the drunk bloke. In the end, a stage manager had to gently usher him away, and the audience finally looked back at us, but it had slightly ruined the "theatrical magic". Another time, I was in a production of Martin Sherman's 'Bent', which is a really brilliant play about gay prisoners in a Nazi concentration camp. It was my first audition at York Uni - in fact, I think it happened during Freshers' Week - so I was quite nervous about it, and it didn't help my nervousness that the first question they asked me was: "Would you be prepared to be fully naked on stage?" I decided that, no, I probably wouldn't - but the part I was eventually given involved me spending quite a lot of time waiting backstage with Ed - a third year, and the ONE Drama Soc member who WAS prepared to be fully naked. 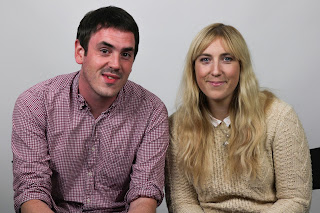 It was quite odd, every night, waiting silently at the side of the stage, just me and Ed - me fully clothed, him completely naked. We couldn't speak, obviously, as we'd disrupt the play, so we just grinned at each other and gave each other 'good luck!' thumbs ups, and generally tried to ignore the fact that one of us was entirely nude. Actually, remembering it now, I'm quite annoyed we didn't put it in FRESHERS. It definitely would've made a funny scene…

My own story is one that I cringe at pretty regularly. I met a guy at a Yeats poetry reading event (I know lol) who I realised also did creative writing; I quite liked him but if anyone knows me - they know that I like to bury my head in a book as much as I like going out and making an absolute fool of myself on a student night.

So I decided to invite this guy (and his friend of course - #keepingitchill) to a club my friends and I were going to at the weekend. 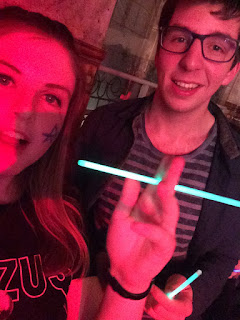 I'm happy to report that I acted really cool and nonchalant for the majority of the night, dancing with my friends and getting drinks (it was 90p vodka mixer night - so obviously), until I felt a bit bad for playing it a bit too cool and basically not talking to the boy - so I invited him outside for a bit of air.

It was all going well - we were chatting and having lots of banter - he even invited me to browse around Waterstones Deansgate with him after next week's creative writing class - but unfortunately I probably had too many 90p vodka mixers and the chat took a turn for the worse. Not in the way you'd imagine...

In a strange turn of events, I turned to my A-Level History knowledge and proudly told this boy that I could recite all of the Prime Ministers from 1939 - 2007.

I don't even know where that came from.

I remember the combined look of confusion and amazement flit across his face, and I thought, I have definitely blown it. Who the heck recites the names of Prime Ministers as a flirting tactic?

Afterwards we went back inside, and I blissfully forgot that the incident had ever happened. It was only the next day, over text, that the boy reminded me:

'Do you remember reciting the names of all the British Prime Ministers to me last night?'

I hated myself for the whole day. Luckily enough, a few months later and that boy became my boyfriend. And a year and a half on, I've never recited the names of the British Prime Ministers to him again. 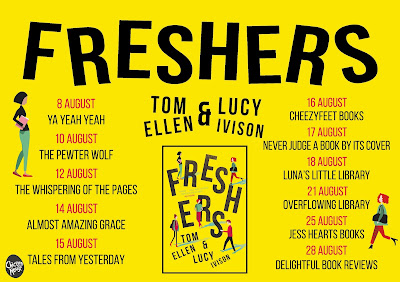 And that's it, folks! I hope you enjoyed mine and Tom's Freshers' stories!

Keep posted for my 5* review of Freshers, coming soon...

Check out the interview Lucy and Tom did on my channel all about Freshers here: https://www.youtube.com/watch?v=40pCpRusPqM&t=138s