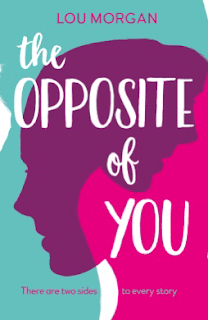 Hi guys, and happy Monday! Today I am very excited to be back with a book review, of a book I read about a month ago, but until now I just haven't had the time to sit down at my laptop and write the review!

Today the book I am going to be reviewing is The Opposite of You by Lou Morgan. The Opposite of You follows twins Naomi and Bex as they navigate their teenage years, with all the complications that being a twin throws up. When they were younger they were completely inseparable, however at the same time that they have grown up, they have also grown apart. When Naomi runs away from home, Bex is forced to confront the uncomfortable reality... when was the exact point that everything changed?

Bex and her identical twin sister Naomi used to be close. They used to be able to finish each other’s sentences, used to know exactly what the other was thinking. They were a matching pair.

And then something changed.

But Bex didn’t even realise until it was too late. When Naomi walks out of the house the night before their last GCSE exam and doesn’t come back, Bex has to think hard about how to find her.

What happens next will force Bex to unpick their shared history and the memories, following Naomi’s trail through their family, their past and all the way to the blinding lights of the Hemisphere music festival. Everything she thought she knew is called into question.

With her worries dismissed by their parents and ignored by her friends (and with Naomi's friends nowhere to be found) the only person Bex can trust is a stranger – Josh – as she tries to piece together a picture of the person she thought she shared everything with. Naomi's been leading another life, one Bex doesn't recognize... and it's led her straight into the path of Max: someone else who is not what they appear.

As Bex chases Naomi, she realizes it isn’t just whether she can find her twin: it’s whether she knows her at all.


And whether she still wants to.

I haven't read a lot of books including twins before, and I was eager to get stuck into this as the story is something unlike anything I have read before. Morgan presented the bond between twins so well and this aspect of the book was excellently explored, as well as the kind of supernatural element, which was interesting and gave a sharp edge to the story. I thought that the different characters of Naomi and Bex were really well created; the dynamic between them was interesting to read about. In fact, the family relationships in this book as a whole were realistically portrayed and sensitively explored. I feel like any teenager would be able to relate to the way that Naomi and Bex feel, and be able to understand the kind of experiences they go through in the book. 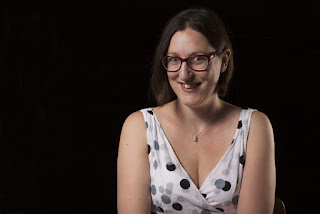 Another part of the book that I enjoyed were the flashbacks to the past when Bex and Naomi were children - I felt like these moments gave a very important backdrop to the current situation of Naomi running away. However, I wish there was more of a build-up at the beginning of the book, exploring in greater depth Bex and Naomi's relationship as teenagers, and also their relationship with their parents. I really liked the development of the plot throughout, however I thought that the beginning and the end of the book was slightly rushed. I would have liked to see how Bex and Naomi's relationship changed at all as a result of what occurred in the story, and this for me would have brought the story to a nice, satisfying close.

However overall, I really did enjoy The Opposite of You and it is definitely a book you can race through on your summer holidays! It is a gripping mystery with a fantastic set of characters and the importance of family relationships at it's heart.