Hey guys, and happy Monday! Today I am very excited to be on the Gilded Cage blog tour, to celebrate the publication of the first book in the amazing Dark Gifts trilogy by Victoria James! I adored this book so I'm excited to be shouting about it in this blog tour!

Gilded Cage is the first book in an exciting, exhilaratingly fast-paced fantasy YA following the lives of Luke, as he makes his way in a world that is governed by the Equals - the Aristocracy who have magical gifts, who control the lives of everyone else. Everyone else including Luke, and his family. In this world every commoner has to dedicate ten years to serve the Equals - whether that be in a slavetown, or an aristocratic house. When Luke ends up in the wrong place at the wrong time, he has to make his own way and figure out what his own destiny will be.

I was sent Gilded Cage by Pan Macmillan in exchange for an honest review :)

Our world belongs to the Equals — aristocrats with magical gifts — and all commoners must serve them for ten years. But behind the gates of England's grandest estate lies a power that could break the world.

A girl thirsts for love and knowledge.

Abi is a servant to England's most powerful family, but her spirit is free. So when she falls for one of the noble-born sons, Abi faces a terrible choice. Uncovering the family's secrets might win her liberty, but will her heart pay the price?

A boy dreams of revolution.

Abi's brother, Luke, is enslaved in a brutal factory town. Far from his family and cruelly oppressed, he makes friends whose ideals could cost him everything. Now Luke has discovered there may be a power even greater than magic: revolution.

And an aristocrat will remake the world with his dark gifts.

He is a shadow in the glittering world of the Equals, with mysterious powers no one else understands. But will he liberate—or destroy? 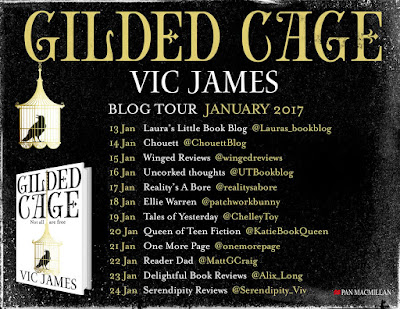 As is probably evident from my 5* review, I absolutely adored Gilded Cage. Most people know that I'm not a huge fantasy fan and I don't read a lot of that genre (my favourite series is Victoria Aveyard's Red Queen, but I don't read more than that), however once I saw the blurb for this book I knew that I wanted to give it a read. It seemed to be The Hunger Games meets Red Queen and I adored every second of reading it. 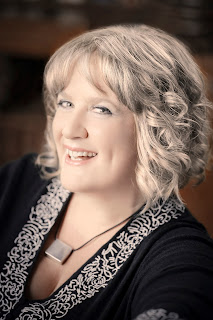 Basically, there was hardly anything I could fault about Gilded Cage. The characterisation in the novel is fantastic, and the story is told through multiple POVs, so you get to know the characters really well and don't get bored by reading one perspective. My favourite POV was Luke - I found him to be such an interesting and complex character, and an easily relatable teenager. Abi was probably my least favourite, not because I didn't find her chapters interesting but because I felt like much of her narrative was spent pining over the love interest, and I felt she could have been as well-developed as the rest of the characters.

This was such a fascinating world and there were no gaps in the explanation of how it worked - I loved finding out about the Equals and although the book is fantasy, I felt everything to be easily understandable and relatable to our world now. Nothing was too far-fetched in terms of plot, and there was continuous action throughout. The pacing was fantastic (think of Sally Green's Half Bad trilogy) and soon enough I found myself to be addicted to the story and needing to find out what had happened to the characters.


Make sure to check out the other spots on the tour!