Hello readers, and happy Thursday! Today I am very excited to be on blog tour, to celebrate a book that would make a marvellous Christmas present for your loved ones... the latest QI book: 1,342 QI Facts To leave you Flabbergasted written by John Lloyd, John Mitchinson, James Harkin and Anne Miller.

This is a wonderful book jam-packed full of facts that you can share around the dinner table at Christmas lunch this year to impress your family, or just to brush up on your general knowledge. Whether you're a fan of the programme or not, 1,342 QI Facts To leave you Flabbergasted is a fascinating, entertaining and relatively easy read for people of any age! 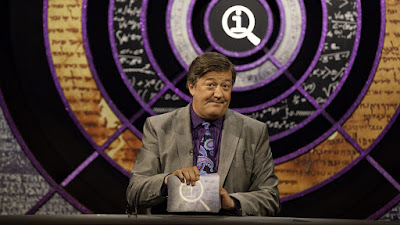 The sock-blasting, jaw-dropping, side-swiping phenomenon that is QI serves up a sparkling new selection of 1,342 facts to leave you flabbergasted.

There is no word for time in any Aboriginal language.

Scotland has 421 words for snow.

Emoji is the fastest growing language in history.

Astronauts wear belts to stop their trousers falling up.

The name Donald means 'ruler of the world'.

Two-thirds of deaths in the world go unrecorded.

On each anniversary of its landing on Mars, the Curiosity rover hums 'Happy Birthday' to itself.

Nostalgia was classified as a disease by the Royal College of Physicians until 1899.

1 in 3 children pretend to believe in Santa Claus to keep their parents happy.

Black coffee drinkers are more likely to be psychopaths.

When you blush so does the lining of your stomach.

Quidditch, Digestive biscuits and overdrafts were all invented in Edinburgh.

The world's only Cornish pasty museum is in Mexico.

Nobody knows why the Oscars are called the Oscars.

A group of unicorns is called a blessing.

If there are any facts you don't believe, or if you want to know more about them, all the sources can be found on www.qi.com

And if that amount of facts wasn't enough to tickle your tastebuds, today I am delighted to have Anne Miller on the blog, to share with us her top ten favourite literary facts!

As I type this, my keyboard is wedged onto the last remaining bit of space on my desk. Even though I regularly try to clear it, the space is constantly being colonised by books. Personally, I think this is a marvelous state of affairs but when the piles get too high they become a health and safety hazard so some of them have to head back to the QI office library.

We are just about to start work on the next series of QI which will be themed around the letter O so books about otters, owls and oranges are beginning to appear and are stacked neatly next to a volume of the second edition of The Oxford English Dictionary (from ‘Moul-Ovum’).

I also have a pile of books from researching our BBC Radio 4 programme The Museum of Curiosity including Dave Goulson’s beautiful nature books A Sting in the Tale and A Buzz in the Meadow, Tony Robinson’s autobiography No Cunning Plan and Salve Deus Rex Judaeorum – the poems of Aemilia Lanyer. Our edition is from 1993 but it was originally published in 1611.

There’s also a few novels, although they’re usually in my bag as I like reading on the tube and have almost perfected the rush hour balancing act of being able to hold onto a bar and turn pages at the same time. Finally, to my right, is a stack of newly-delivered finished copies of 1,342 QI Facts To Leave You Flabbergasted. The book is bursting with facts, which are linked together one to the next. I think they’re all flabbergasting but I have a soft spot for the literary facts. Here are some of my favourites: 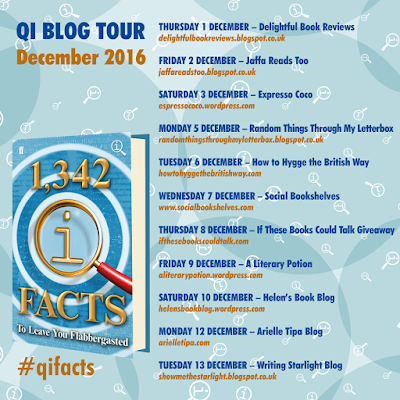 • The Girl with the Dragon Tattoo is how the author Stieg Larsson imagined Pippi Longstocking as an adult.

• The Oompa-Loompas were originally called Whipple-Scrumpets.

• The video game Fallout 4 is set in a post-apocalyptic world where you get rewarded for returning library books.

• In his lifetime, Edgar Allan Poe’s bestselling book was a textbook about seashells.

• In the seven years Wordsworth was Poet Laureate, he didn’t write a single
line of poetry.

• Man Group,
sponsors of the Booker Prize, were once responsible for supplying the Royal Navy’s rum ration.

• There’s a bookshop in Tokyo that only stocks one book at a time.

• The earliest known book of manners advises: ‘Do not attack your enemy while he is squatting


Thank you so much, Anne, for appearing on my blog and for sharing with us these facts!

1,342 QI Facts to leave you flabbergasted is available from Amazon and Waterstones at price £9.99!