THE BATTLE OF THE UNDEAD | Q&A with author Nicky Peacock

Hello readers, and happy Thursday! Today on my blog I have a Q&A for you, with the  author of The Battle of the Undead series, Nicky Peacock! Nicky is the author of two YA book series with the publishers Evernight Teen (based in Canada), and of over 30 short stories published in anthologies by publishers all over the world, the most recent of which was included in Little Brown Book's Mammoth Book Of Jack The Ripper Stories.
Released in April this year by Evernight Teen, Lost in Wonderland is the first book in The Twisted and the Brave series, a dark thriller with a classic children's literature twist and a dash of the supernatural.

Monsters, serial killers, and imaginary friends—being a Wonderlander can be murder...

Once upon a time, Kayla was lost. Then she found Wonderland, but not the one you know. Run by ex-government agents and funded by an eccentric Silicon Valley billionaire, this Wonderland is the name of a collective of highly trained vigilantes who hunt serial killers. Now Kayla, aka Mouse, works tirelessly alongside her fellow Wonderlanders, Rabbit and Cheshire, baiting dangerous murderers. But even her extensive training hasn’t prepared her for the return of her older brother…

Shilo has spent most of his life in an insane asylum, convinced his mother was abducted by a sinister Alaskan monster who lures the lost away to feast upon their flesh. And now he’s certain that his sister is in the same monster’s crosshairs. But if Shilo is going to save what’s left of his family, he’ll have to convince his sister that maybe, just maybe, we’re all a little mad.

Today I am lucky enough to have Nicky on my blog to talk all things fantastical, as well as her writing process, the joy of writing groups and her top tips for aspiring writers!

Hi Nicky! So, tell us a bit more about ‘Lost in Wonderland’. What was your inspiration behind it?
Last year was Lewis Carroll’s Alice in Wonderland’s 150th Anniversary. I’d always loved the book and had seen several takes on it through the years. As an author, I really wanted to put my own spin on it and honour the book, not just as re-telling but as something different. Lost in Wonderland follows the main themes of the original book like, growing up and being lost and transplants them into more of a contemporary thriller setting. As I’m a bit of a horror addict, I had to have a supernatural edge in there too and I loaded the book with quotes from the original book and parallel scenes.

Kayla and Shilo are the two protagonists in ‘Lost in Wonderland’. Tell us a bit more about them. What are they like? 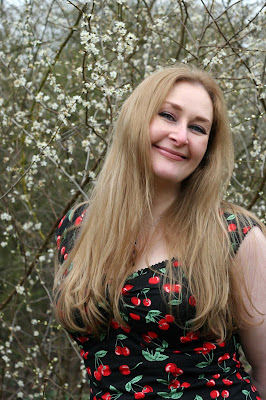 They are brother, and sister. Shiloh is the eldest; he’s been in an asylum for most of his life and has a very child-like view of the world. He wants to re-connect with his sister but struggles with living in the real world, fortunately, his imaginary friend; Mr. Custard is there to help.
Mouse is Shiloh’s little sister, she has spent most of her life living in an underground vigilante group known as ‘Wonderland’. She hunts and baits serial killers with her foster family and has become detached and cold.

What is your writing process like?
LOL, a little haphazard! I tend to plot out the bones of a story then flesh them in as I go.I have a habit of writing scenes out of order – I tend to like to write the ones I’m most passionate about first, those pivotal scenes that are drenched in emotion or action or both. I then have to copy and paste everything together at the end like some kind of arts and crafts project. By the time I’m finished I do breathe a heavy sigh of relief, have a
cup of tea, then have to get on with the next one!

Do you have any writing advice or tips you would give to aspiring writers?
Start small. There’s a massive market of anthology publishers out there looking for good work. By cutting your teeth at this level you learn about writing, working with publishers and editors, contracts and promoting your work. You won’t earn much money from doing this but think of it as kind of an apprenticeship scheme. When you’ve spent some time in this market, you’ll have a solid CV of published stories and experience so when you pitch your novel, you’ll look much more attractive to a publisher or agent. 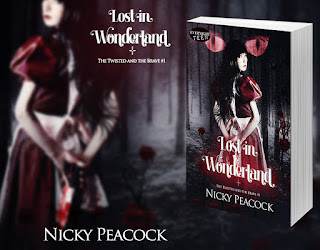 Also, join a local writers’ group. I’ve run one in my hometown for nearly 6 years and it’s been instrumental in both the development of my writing and my skills as a writer. It can be a long lonely road to go alone, so finding other like-minded individuals who will motivate and encourage you is priceless.

Sum up ‘Lost in Wonderland’ in three words!

A must read! Lol, no, how about: Violently twisted classic.

Thank you so much, Nicky, for being on my blog!