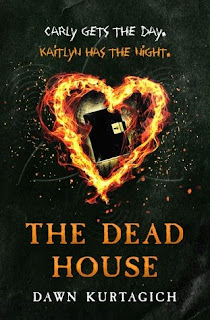 Good morning, readers, and happy Wednesday! Two posts in two days, you say?! Good grief, Alix, you're actually being productive for once! All joking aside, I am extremely priviledged to be the third stop on the blog tour for the chilling YA debut novel by Dawn Kurtagich, The Dead House. I received this book from Orion, and I read it a few weeks ago. Blimey, it's a creepy read. It is definitely one of my most anticipated and highly recommended books of 2015.

Therefore, I was so happy when I was asked to take part in this blog tour! This particular tour has a special twist- it is a mirror tour- so each day on the tour there are two blog posts, one published in the US, and one published in the UK. Today, my US blog buddy is WhoRuBlog, so after you've read this, pop over and say hello! My post is from the perspective of Carly, and the US post is from the perspective of Kaitlyn- the 'two' protagonists of this creepy novel. 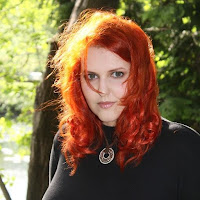 Part-psychological thriller, part-urban legend, this is an unsettling narrative made up of diary entries, interview transcripts, film footage transcripts and medical notes. Twenty-five years ago, Elmbridge High burned down. Three people were killed and one pupil, Carly Johnson, disappeared. Now a diary has been found in the ruins of the school. The diary belongs to Kaitlyn Johnson, Carly’s identical twin sister. But Carly didn’t have a twin...

Re-opened police records, psychiatric reports, transcripts of video footage and fragments of diary reveal a web of deceit and intrigue, violence and murder, raising a whole lot more questions than it answers.

Who was Kaitlyn and why did she only appear at night? Did she really exist or was she a figment of a disturbed mind? What were the illicit rituals taking place at the school? And just what did happen at Elmbridge in the events leading up to ‘the Johnson Incident’?

Chilling, creepy and utterly compelling, THE DEAD HOUSE is one of those very special books that finds all the dark places in your imagination, and haunts you long after you've finished reading.

So, without any further ado, let's get on with the tour! Below is Carly discussing her favourite school subject... 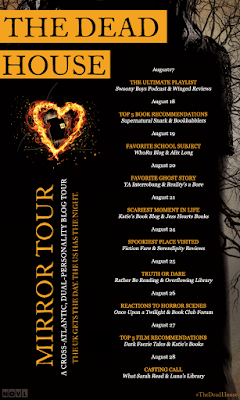 I like things that make sense.
Most things don’t.
I don’t know why my parents are dead.
I don’t know why I feel so strange sometimes.
I don’t know what Kaitlyn and I are, except real. That we are real is one of the only things that I do know for sure.
With Maths, there’re only two options. Correct. Incorrect. Right or wrong.
And if you’re wrong, you can find the answer. All you have to do is to look back at the journey that brought you to that conclusion. Follow your footsteps across the page and see where you went off course.
And Chemistry. Taking two elements, combining them and making something better. Like Kaitie and me. Finding the new combination and then finding a use for that. Chemistry is art and creation, but there are rules and formulas—a set path. Right or wrong. Reaction or none.
Physics. The study of motion, the study of our world and beyond our world. What better way to spend your time than studying the truth? Finding formulas and explanations for the reasons things are the way they are. Predicting what objects will do when you exert certain forces on them—magic.
There is a lot I don’t know.
But if I have a map and a set of rules, then I will get there.

Suitably creeped out yet? Hungry for more? Then don't forget to pick up a copy of The Dead House, and follow the story on the blog tour!

Check out my review of The Dead House here: http://delightfulbookreviews.blogspot.co.uk/2015/08/the-dead-house-by-dawn-kurtagich.html