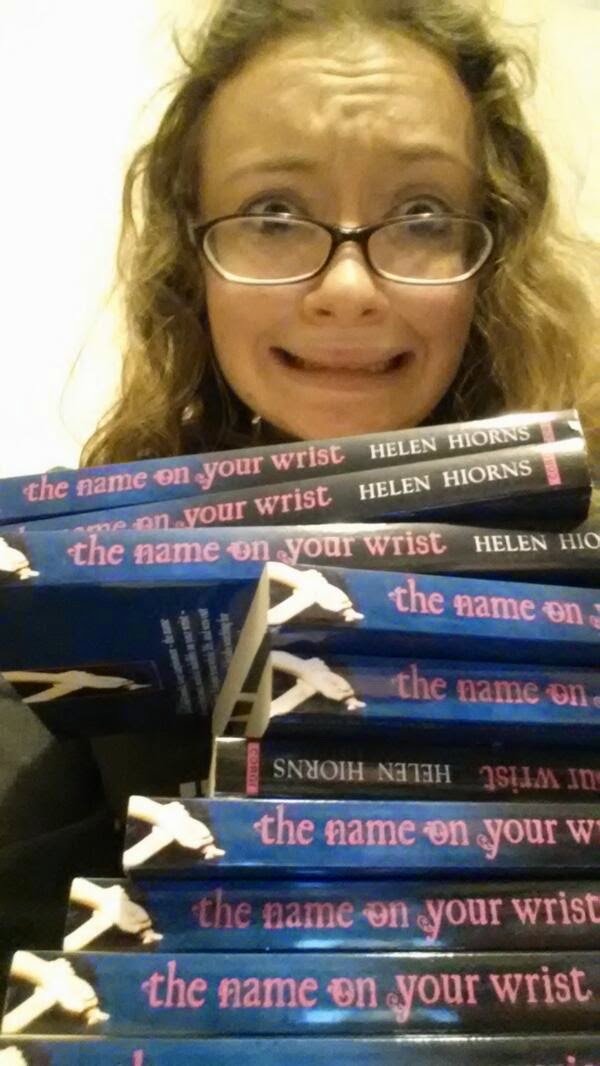 When did you first start writing?

I first started actively writing stories and posting them online when I was about thirteen… but, when I think about it I was drawing out family trees for the biggest fictional family ever when I was eight, I was writing terrible poetry (for church, embarrassingly enough) before I was a teenager and I handed in half an exercise book of terrible handwriting when asked to ‘write a story’ waaay back in year one. I guess I was writing long before I acknowledge I was writing – it was just something I did without really noticing it for a long time. From early teen onwards, though, I was dedicated to it. I think I once worked out that I wrote and posted and average of 600 words a day for nearly six years. That’s a lot of writing!

Before the Sony Young Movellist Competition, did you ever think of sending your work off to a publishing house?

Yes.
I’d never wanted anything like I wanted to be a writer. I remember spending whole days sitting around and moping about how I’d never be good enough/would never manage it/would never get to be an actual writer. I realise now that this was somewhat pathetic… but it did half lead to some very vague experiences of publishers before the competition.

When I was about fifteen I was co-writing a book with one of my friends. He sent so many thousand words and a synopsis to a really small publishing company (being much more proactive than me; I was more of a sit and feel sorry for yourself without ever doing anything about it type). They got back to us and said that they were definitely interested… then the credit crunch hit hard and the company went bust. We never actually finished that book and it was a very small company, so it was probably for the best.

At a similar time I was writing a lot of stuff online, mainly fanfiction, and some of it was pretty popular. I had this one story that now has about half a million reads, although didn’t have quite that much at the time, and a few thousand reviews. One of the readers of that story contacted me and said that her parents, godparents, family friends and basically everyone in her life were in publishing, and she’d love to give them some of my work if I was interested. Anyway, she did, and they said they liked it but that no one was taking on any new authors because of that recession thing (I don’t know how much of that was actually true, but it was a confidence boost anyway).
So, the movellist competition was actually third time lucky for me. I didn’t think I was good enough yet, so I entered on a complete whim and didn’t expect to hear anything back from them. I had considered self-publishing, but I’m really glad that I didn’t have to go down that route. I can’t imagine how difficult it would be to edit and promote a book all by yourself! I have serious respect for anyone who manages it.

How did you come up with the idea for 'The Name on Your Wrist'?

I have this bad habit of getting irrationally angry about commonplace ideas of what’s ‘romantic.’ I’d read a couple of things about soul mates and I just didn’t get why it was supposed to be a romantic notion. Surely it’s more romantic if you could be happy with a number of people that you’re compatible with in some way, and then you chose a particular person? What would happen if your ‘soul mate’ died? Or if you never met? Are you just supposed to sit there and be lonely?

So I decided I wanted to take a different slant on the notion of soul mates and wound up with a dystopian-esque teen romance (ish). It was fun.

What's the difference between having your work published on an eBook, and having it published in paperback? Which do you like better?

I remember a while back I was talking with one of my friends about writing and my ebook. He goes ‘well, you never know… one day you might be on a shelf in Waterstones’ and I had the great pleasure of being able to bite back with ‘yes, that day is called the second of January.’
Nothing screams ‘I’m a real author’ like a paperback. Having an ebook was really exciting… but no way near as exciting as having an actual 3D edition of your book. I got to hold it and everything! And whenever you’re casually staking out a bookshop you have the option of seeing whether you can find your name on the shelf. Not that I do that.
Much.

Where do you get your inspiration from?

I’m going to fall back on one of those annoying cliché answers here and say life. Spending time with my friends, overhearing conversations and being busy is what gets my muse going… which usually means that I’m most inspired when I’m at my busiest. Trouble is that always leads to me itching to write all day. Then I get home, exhausted after doing whatever-it-was, crawl into bed with my laptop, put some mindless tv show on for background noise and try to write. Inevitably, I end up watching the bad TV show and falling asleep.

I find fiction and music inspiring too, but because of how it encapsulates life. I read something beautiful or profound or just plain touching, and then I think I want to do that too. I want to make my thoughts words and solidify them into fiction.

Still, what it usually means is that when I reach the summer holidays and months of scheduled nothing, I end up staring at a blank word document and re-remembering that spending whole days watching Jeremy Kyle and Come Dine With Me has never inspired anyone.

How do you balance university, work and writing?

Oh, this is so difficult.

Last year, I managed it easily. I finished four novel length works last year (three of them had already been started, one was from scratch). I was really lucky because I was placed in a flat with people who were soon to become my best friends, found brilliant course mates in my first few weeks and really loved the content of my degree, too. I was so happy and so inspired that I somehow managed to squeeze writing in around having a social life, work and coming home and doing my old Saturday job at Christmas. This year…. Not so much.

I started this year with six months solid of writer’s block. I think it was probably a publishing hangover, because I’d never had any kind of block like that happen to me before. I considered not writing for three days in a row pretty extreme back then. They don’t tell you that having your dream come true is terrifying. Wonderful, but terrifying.

I got my mojo back at Easter, colliding head on with a triple essay deadline and the exam season (another six essays). I also took on a load of volunteer work type stuff around that time so… yeah, I’ve written hardly anything this year.

So… I’ll get back to you on that when I’ve actually worked it out. What has been the best thing that has happened since your book has been published?

My life is genuinely brilliant at the moment, so it’s really difficult to say. Bookwise, we sold the rights to Brazil and they’re translating it into Portuguese, which is awesome. I had a whole display dedicated to my book in one Waterstones. I now have access to this up to date track of book sales, which may possibly have ruined my life. Cannot stop refreshing.

I’ve also found a church I love in Sheffield where I’m at uni, spent another year living with my best friends, had a wonderful time at uni, the opportunity to take a break from the crappy English winter and go to Cyprus with two of my course mates and am beginning to work out what I want to do when I finish my degree next year. Things in my life are much better than I ever thought they could be. No complaints from over here.

How has Movellas helped you on this journey?

Although I only found out about Movellas through entering the competition, they’ve been so helpful.
I was backpacking round Europe when I found out that I’d won the competition and they’d be publishing my book in a few weeks’ time, which was very impractical (although very romantic, it’s got to be said). I got calls from Random House in Hamburg, calls from Movellas from Poland, edits to do in Prague and a video to film in Switzerland… but in actual fact the whole thing ran like a well-oiled machine. The awards ceremony was brilliant and the competition was such a wonderful opportunity to give to young authors.

Since then, I’ve written a few blogs for them and they’ve talked about running a competition around my book at some point.

Writing platforms like Movellas have given me so much over the years. I definitely would never have finished writing my first novel (and beast of a thing with so many irrelevant side plots that I can’t stand to read it anymore) without readers… and I wouldn’t have learned what things worked and what didn’t, or that I can write humour as well as angst. Giving people an audience they can interact with is a wonderful thing.


What is next for you?

The Name on Your Wrist was always supposed to have a sequel and I’ve been working on that sporadically over the past year. It’s been one-upped slightly by this idea I’ve been completely in love with for a year, but could never get to work properly until recently. Now it’s summer I’m hoping to get lots of writing done. Ideally, I’d like to finish both the sequel and the other story this summer… but we’ll see.

I’ve also got a couple of other novel ideas that might need a bit dusting off.

I should probably also go outside at some point this summer.

Any advice for young, aspiring writers?

I’m sure this isn’t anything that hasn’t been said before, but it’s definitely important to write about something you’d like to read about. Write the story you’ve been itching to see told. Not only does that definitely help with motivation and makes sure that you’re passionate about the story, it probably means someone else would like to read it as well.
Keep writing. The Name on Your Wrist was something like my eighth or ninth finished novel length work… and you get better the more you write. And try writing everything. I used to be convinced that I couldn’t write humour, not at all, but it turns out that isn’t as true as I thought.


My number one piece of advice is to remember why you’re bothering to write in the first place. Writing is amazing. You can put your thoughts and feelings and perspectives into words and characters that people can relate to. Telling stories is this amazing intrinsic human need. Words can do things.  Remembering that is really important… and seriously inspiring.

Thank you so much Helen for agreeing to be interviewed! You can buy Helen's book here, and follow her on Twitter here (believe me, if you think she's witty and hilarious in this interview, you clearly haven't seen her Twitter).

Check out my book review of 'The Name on Your Wrist' here.