This is my first author interview- the first of many I should hope! It was a really great experience and Marcus was incredibly interesting to talk to- and also a lovely guy! I have had to edit a lot of the interview because there are a few sneaky questions I asked for advice about my own writing, so let me know if you would like some writing advice from Marcus as he gave me some very good pieces of advice. I hope you like the interview, and please comment below with your thoughts! 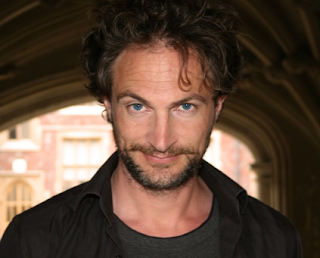 How did you start writing and what is the thing you enjoy most about it?

The significant thing that happened was that I went to university still not knowing what I wanted to do and when I left university I still didn’t know, so I went to work in a bookshop, because I liked books and it was a nice environment and that was the trigger for me thinking ‘real people write these books’. So that made me realise that real living people write books and they get sold in bookshops so I started to try writing myself. It took me a few years and I wrote a few books which weren’t published but they got me an agent and then the big, whole novel that I wrote was the first one that my agent sent off to Orion who I’ve been with ever since.

One thing that I enjoy the most about it? Well that’s hard, because it is just so fantastic! One thing is that you’re your own boss- that’s worth so much money to me. Because you are free to do whatever you want to do with your life on a daily basis and not having someone to crack the whip, and you’re also not doing a job that you hate, which I have done before. That’s the lifestyle part, but for the writing part it’s because you are getting paid for the strange thoughts in your head. You think of something and put it down on paper, and then people are buying it- that’s something I still haven’t actually got over.

Where did the idea of ‘She Is Not Invisible’ come from?

Originally it was because I had been trying to write a book about coincidence for many years, and I was failing, and I gave up a lot of times. Five years went by, and I was writing other things that did succeed, but I finally realised that coincidence was a really hard thing to write about and usually it doesn’t work when it is done, because coincidence is generally what a bad writer uses to get out of a weakness in their plot, and we as readers don’t like coincidence because if something overly convenient happens we don’t believe it, and so therefore to write a book where those things are happening seemed to me to be self-defeating. So then I had the idea to write a book about a writer trying to write a book about coincidence instead, because then I could still talk about all the same things that interested me but they were at arms-length. Then, coincidently, at the same time I saw a film about a blind girl and somehow I thought it would be very interesting to have a protagonist who was blind. I then spent a couple of years researching that side of it.

So what is it that interests you about coincidence and why did you decide to write about it?

Everyone likes a coincidence, and the thing about it is that it only takes something relatively small to happen for you to get that tingle, and if a really big coincidence happens (I’ve had some strange things happen to me), it really does freak you out. It struck me that coincidence would be a good subject to write about because everybody shares their coincidences if one happens to them.

What was it like working with the students at New College, and how do you think they reacted to your project?

They were amazing, and the very first time I went to New College I was in a very bad place writing-wise, but I still had this idea about coincidence and a blind protagonist. I wasn’t sure what I was doing there at first because didn’t know a book was going to come out of it, but I went up there and I went to the librarian first and said what I wanted to do and she was great, really welcoming. I was very honest with the students and I said that I was trying to write a book but I’m not sure I could do it, but they were so welcoming and I came away that first day feeling that it was the best visit I had ever made to a school. The students were amazing to talk to, they were a great group to speak to and afterwards I came away feeling guilty because I felt that they had given me so much, and had really cheered me up and made me feel better about what I was trying to do. They were so honest about what it’s like and the tough times that they have and the way people treat them.

What made you choose to write from the perspective of a 16 year old visually impaired teenage girl?

Why not? This is my thirteenth novel and I have written with different genders, ages and characters so you don’t want to do the same thing every time so I’m always looking for something a bit new and different to do. Originally, I knew it was going to be a massive challenge, but because I had written lots of books it’s very important you don’t get stuck doing the same things. Writing from the perspective of a blind protagonist seemed like the way to do something different! The other thing was that unconsciously I had made a connection between the concept of fortune and destiny and blindness, and it was only when I had finished writing the book that I found the quote from Francis Bacon that forms the title that I realised what that link is, so I was stumbling around in the dark for a while, and then that happened by chance that I found a link that made sense.

Why did you decide to write about something completely outside the realms of your own experience?

The hardest thing to do when writing is to keep on going, and keep being sufficiently excited by an idea that you go and sit by yourself in a room for eight hours a day for several months until you have written 80,000 words- you really need to love what you’re doing to want to do that! If you want to keep on writing to maintain sufficient excitement you need to challenge yourself and try to push yourself and develop yourself.

What would you say is the most important aspect of a novel: plot, character or setting?

I think that they are all equally important but I think different writers have different strengths and starting points and what you need to end up with is a book that’s pretty powerful. I used to always start with plot- plot as in concepts and ideas or something in history, and that would then develop into the plot and once I have that I create the setting. Then out of those two things I create the characters to do the things I want them to do. I realised that I needed to start working on character a lot more, which I have been trying to do recently. My editor never picks holes in my plot but finds faults in my characterisation.

Why did you decide to write teen fiction?

The bookshop that I worked in was a children’s bookshop in Cambridge and so I was re-discovering books that I read as a child, and at that time there were a lot of exciting children’s writers like Philip Pullman. I started to realise that these books were really exciting because you could do anything, there was enormous freedom, and as long as you do it convincingly that it’s plausible within its own world you can write way more adventurous stuff than you can write in adult fiction. I wanted that freedom and that excitement to write whatever I wanted.

How do you think books can change the world?

I think they can, because the way that change happens is that if you believe it and you tell someone else then they believe it too, and that’s how things can change. Books can change people’s minds, open doors to them. Even if you are in impoverished circumstances you can still go to the public library and pick up a book and it can take you anywhere in the world. That isn’t necessarily about travelling but about showing you different points of view, and I think that one of the main things that is helping people is that reading makes you realise that not everyone has the same point of view and the dangerous things that happen in the world is when you think, ‘everyone should think how I do’. I think books can be part of that change.