Shadow and Bone + Siege and Storm by Leigh Bardugo (****) 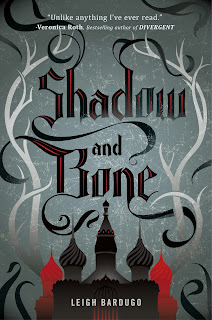 It's even past the point now where I can apologise. But I will. I'M SORRY. I finished these two books in July, and haven't even written the review until October. For anyone, that would be unforgivable. But because it's me, it's even worse, as this should be the one thing in my life I do not put off doing, but I have, just because I never quite had the moment to sit down and actually think about what I could write about this book, which is in itself quite a challenge. 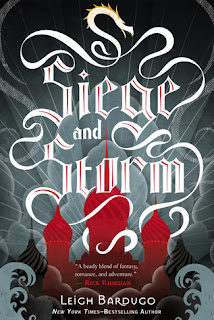 But yes. Apologies over. Let's crack on with the review.

When Shadow and Bone & Siege and Storm by Leigh Bardugo arrived for me in a big heavy cardboard box in the post the day after finishing my exams, I do have to admit that my heart sunk a little. Fantasy books, let alone epic fantasy books, scared me slightly, and the size of this one was little more than terrifying to a realism-detective-romance kind of girl. Admittedly, I have never even read the Harry Potter or Lord of the Rings novels, so I was not really in a position to receive one of the few remaining double-bound copies of Bardugo's work, but I was lucky enough too, so I swallowed my nervous feelings of teenage wizards and long treks through countries that don't even exist, and began reading.

The first thing I realised was that the main characters of Alina and Mal were not only extremely likeable, but also believable; unlike the students at Hogwarts they appeared like regular teenagers, even though they couldn't be living in a more contrasting world. The way that Bardugo wrote made me feel that (cue the cliche) I was experiencing the same unbelievable things as Alina was, as I could relate so easily to her. The build up to the action was slow and intense- just the way it should be. The more normal that Alina was presented as made me even more curious to find out what would happen and low and behold: I was soon introduced to the beautiful, black, glittering world of the Grisha. I have just three words for you: vampires... But cooler.

Along with the teeth-clenching suspense woven perfectly in with the beautifully crafted storyline along with the meticulously created protagonists were the other characters in the novel, who filled in the gaps that the protagonists left behind. I felt compassion for Genya, even when she... (Removed to avoid any spoilers), and even Sturmhond, who together revealed a lot more about Alina than I had imagined. The Darkling however, I was slightly confused about. I am really curious to find out whether anyone else pictured this powerful slightly-scary creep to be about forty years old? I thought it was a nice twist to have the villain to be another teenage heartthrob, and I can't wait to see who is cast in the movie (Robert Pattinson, are you available?) However I guess if the Darkling was a creepy middle-aged man that would be a complete other story...

It's hard to say which of the two books I preferred, because they were those kind of books that work completely on their own yet perfectly complement each other, and the reason why I decided to review these two books as one was because I found the best way to read them was straight after one another (Not in the same night though, because that really isn't good for your eyes). Shadow and Bone & Siege and Storm were the kind of books you could easily just lose yourself in, and there was nothing better than curling up with them on a cold, rainy Cornish summer's evening, and being swept away by a world which, let's face it, is ten times more exciting than our own.

So overall, to sum up these two fantastic novels, I would say that they are two incredibly unique books that are a completely unique kind of YA fiction. I sincerely hope that books like these will map out the ever-promising future for YA fiction- away from the world of High School crushes and creepy vampire babies. And yes, before you ask, I am now an Epic Fiction Convert.